This regular feature of my blog is a little delayed this week by a particularly heavy workload yesterday and on Sunday. But here you go - Cthulhu-mythos-type Deep Ones for Stars Without Number! 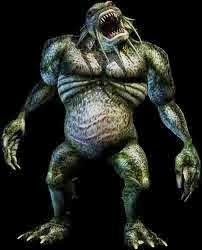 
The Deep Ones are a race of aquatic monstrosities, part aquatic, part amphibian and part humanoid, who have inhabited the oceans of several planets for aeons. And yet, they remain; dwelling under the waves in their magnificent, if terrible, reef cities, where they pay tribute to their father-god, Dagon, as well as to their over-god, K'tulu. The Deep Ones are not content with living underwater, however. In service of their utterly alien masters, they seek to infiltrate coastal colonies, intermixing with the local human population, and tainting the blood of men with their terrible curse.

A Hybrid is a regular human tainted with Deep One blood; in addition to its abilities noted above, it may hold his breath for up to 10 minutes with no difficulty, and sometimes uses this ability to ambush unsuspecting prey who wander near murky water. Without close inspection, however, Hybrids may pass for normal, if ugly, humans, and they may use this fact to lure unsuspecting victims to their seaside villages, and even to stay at their inns, and then capture them and sacrifice them to their dread god K'tulu. They usually wear unkempt clothes or light armor and fight using simple weapons such as shotguns, pistols and semi-automatic rifles, though better armament may exist in some places. Each Hybrid gang is led by a ringleader with AC 7, 2 HD and a 14+ saving throw - as well as typically better weapons than its subordinates. Each Warband is led by a war-chief with AC 5, 2+1 HD, and +1 to melee weapon damage and to hit due to greater strength. A Deep One Hybrid village will be led by a headman with AC 4, 3 HD and +2 to damage to to-hit in melee from Strength; as long as he is alive, his cohorts will have Morale 11; in addition, there will be a minor Priest of Dagon in each village, with AC 7, 3 HD, gifted by its mad masters with free access to levels 1 through 3 Precognition and Telepathy psychic powers.

A full Deep One is a monstrosity combining the features of a man, a frog and a fish. It may breath freely both under and above water, can see into the infrared spectrum and is immune to most disease; it has a very long life-span measured in centuries and it is theorized that such creatures' bodies produce natural anagathics preserving them from regular aging. Deep Ones have thick scales protecting their bodies and attack with their claws and teeth. Each Deep One gang is led by a champion with AC 2, 4HD and +1 bonus to both attacks and damage from Strength. Each Warband is led by a war-chief with AC 4, 6 HD and +2 to to-hit and damage rolls due to his massive strength. A Deep One village is led by a prince with AC 2, 8 HD, and +2 to damage to to-hit from Strength; as long as he is alive, his cohorts will gain a +1 bonus to Morale; in addition, there will be a Priest of Dagon in each Deep One village, with AC 3, 7 HD, and access to precognitive and telepathic psychic powers of levels 1-5.
Posted by Omer Golan-Joel at 3:24 AM