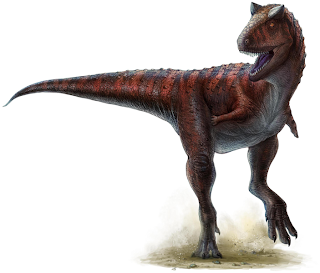 The Carnotaurus is a large, though lightly built, predatory theropod, specializing in ambushing its prey. With teeth like swords and a bite force eclipsing that of a large crocodile, a Carnotaurus hunts dinosaurs larger than itself, tearing their flesh in bestial ferocity. While lacking the bulk of larger predatory theropods, the Carnotaurus is capable of attaining impressive speed, attacking the prey from surprise. As an ambush predator, it gains +2 to all Surprise checks. While untameable, this dinosaur is a popular foe for gladiators to fight in the arenas of Kanahu.
Posted by Omer Golan-Joel at 8:59 AM