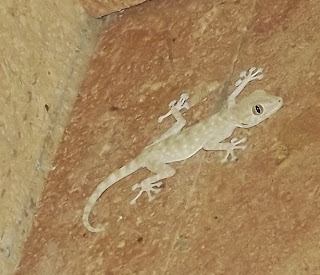 (pictured here is a real fan-fingered gecko, for inspiration)


The two main civilized races of my Barbarian Conqueror King setting are Men and Lizardmen; both have built mighty civilizations and impressive works of culture and craftsmanship. At the edges of civilization, however, there are other sentient species, two of which show enough variety in their personality and alignment to be potential player character races: Gecko-Men, who hail from the desert caves and cliffs of Queddar, and Bugmen, who lack a clear homeland and thrive wherever the opportunity for trade, scavenging and theft is open to them. Both are uncommon in the countryside of kanahu, but can be found in the city-states, though usually as a small minority compared to the vast masses of Men and Lizardmen.

Gecko-men look like upright, humanoid Fan-Fingered Geckos, thin and nimble, with large, lidless eyes (with slit pupils) dominating their faces. Their scaly skin ranges in colour from light grey, through yellowish-beige to brown, sometime spotted with yellowish spots. Unlike a Lizardman, however, their scales are gentle and soft, and thus give them little protection beyond what a Human skin can provide. There are very little external differences between males and females (unless the female is gravid and thus bloated), though a Gecko-Man will recognize the sex of a fellow Gecko-Man or Gecko-Woman at a glance (humans who are unfamiliar with Gecko-Men cannot recognize Gecko-Man gender; if familiar with them, they'll correctly recognize the gender on a roll of 11+). Gecko-Men prefer to be active after dark, and, in their natural habitat, wear very little clothes, but a good amount of jewellery.

Most Gecko-Men live in the deserts of Queddar, where their tribes inhabit barren stone cliffs and deep caves in the rocky parts of that wasteland. They are, first and foremost, hunters. A Gecko-Man (or, indeed, Gecko-Woman!) is content to spend countless hours motionless on a cliff wall, hanging from it with his or her adhesive toe-pads, lurking for prey to come - dinosaur, giant insect, or otherwise. When the prey comes near enough, however, the Gecko-Man acts quickly, with lighting reflexes, and with spear or bow it will bring the animal down and secure sustenance for him and his tribe for a few more days. From this predatory nature, arise the common psychological characteristics of the Gecko-men, and, first among them, seemingly endless patience and the penchant for plotting elaborate plans, which may lay dormant for years, then close on their subject like a well-placed trap.

Experience Point Progression After 8th Level
Gecko-Men increase the amount of experience required to gain each level after 8th by 25,000XP.