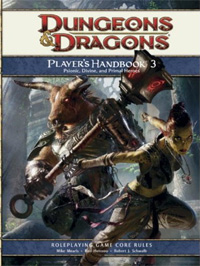 Heh... I am very late to the bandwagon. Four years have passed since Dungeons and Dragons 4th Edition has come out, and I have finally played it. First and foremost, I must say that I'm "on the fence" in regard to editions - while I still like ACKS and D&D 3.5E better than 4E, I don't think that 4E is a bad edition. In fact, it has its own strengths (as well as weaknesses).

So far I played in three sessions of D&D 4E, two of them in a short, abortive game with friends, and one in a local mini-convention (Nexus-Con in Rishon Lezion). In the campaign with friends we made our own characters, which took us two-thirds of a session (more on that later); in the convention we had very well-presented pregens with very effectively laid-out character sheets. All in all, I think I have about 12 or so hours and 4-5 encounters of 4E play experience under my belt, compared to hours over hours of 3.xE and even more 2E experience.

1) The skill system. In the hand of a competent (or even half-competent) DM, the 4E skill system is versatile, very easy to use and intuitive, especially when compared to the very long skill lists of 3.xE. Everyone has the same small number of skills, with different modifiers; the skill modifiers are 1/2 of your level + ability modifier + 5 if you are trained. No fiddly skill-point allocation. As the skill list is simple and it's very clear what every skill does, all while you can creatively apply any skill for a multitude of purposes, it seems very easy to adjudicate.

2) The At-Will/Encounter/Daily Power system and Healing Surges. While, unfortunately, most powers are combat-specific (more on that later), the amount of accounting needed for actual combat powers is smaller than in 3.xE, and the "15-minute adventuring day" issue is greatly mitigated. A big battle in 3.5E, taking a few minutes of actual in-game time, can burn through many of your spells, powers and HP, forcing you to go to rest minutes after getting up from the previous rest. In 4E, you might have burnt your Dailies, but you'll still have your Encounter and At-Will Powers ready for the next battle; and with healing surges, you'll be able to go through a lot more battles per day than in 3.xE without spending too many precious spells. Also, the fact that Clerics don't really have to choose between healing spells and other spells is liberating; you can even have a very good adventure without needing the mandatory Cleric to fork out healing. Oh, and Fighters can do a lot more than just "I hit him with my axe". Oh, and you no longer have low-level spellcasters pin-pricking enemies with puny daggers once they run out of spells; they all have a few low-grade at-will spells.

3) When using pregens and well laid-out character sheets, the game seems very friendly to newcomers. While character creation is very long and somewhat tiresome, once you have a character on a well-detailed character sheet, it's very easy to use. I have seen a lot less page-flipping in 4E than in 3.xE.

4) Static defences. This is a Heresy, I know, but this makes some sense from a game-design PoV - a magic attack is an attack like any other and the attacker (caster) rolls to-hit rather than the defender a saving throw.

1) Character Generation complexity. Well, honestly, this is quite typical for games such as D&D 4E where you get tons of chargen options and specific powers. The first time we made characters for 4E, it took us two or three hours to get all characters ready and all their powers copied to index cards. We probably copied also stuff we didn't need on the index cards, though. However, compare that to the 10-30 minutes necessary to generate an ACKS character (roll 6 stats, choose class, record attack roll and saving throws, choose proficiencies and buy gear) or the 5 minutes necessary to generate a character in Classic Traveller. Well, that's a good reason why characters don't die easily in D&D 4E, die much more easily in ACKS and die even more easily in Classic Traveller - after all, if all you need to roll up a character are 5 or so minutes, it isn't so much of a setback to the game to have one eaten by acid-blooded arachnids...

2) Combat grind. Combat takes a long time - seemingly as long as in 3.5E and maybe even longer - and both monsters and heroes have high HP, so it takes a lot of time to kill one even with Encounter Powers. The fastest kill in the convention game was does with a Daily - a Fireball - killing several enemy archers in one hit in a particularly satisfying manner. Other than that, people die slowly.

3) Everything seems to be very combat-oriented. Almost all powers are combat-specific and anything done out of combat uses the good, though quite sketchy, skill system. I don't recall seeing any exploration-oriented spells in 4E, but I might have just missed them due to the combat-heavy nature of the convention game.

Bottom Line
Well, it doesn't seem like a bad game. Not necessarily 100% my cup of tea but could be a nice option to try. I wonder, should I get my grubby hands on the three 4E core-books, or should I rather stick with ACKS (or wait for D&D 5next)?