I've started working on the vehicle part of my 15mm 'lead pile'.

First is an armoured car with a minigun, using a 15mm.co.uk Light Tank, for my sci-fi Mars Project: 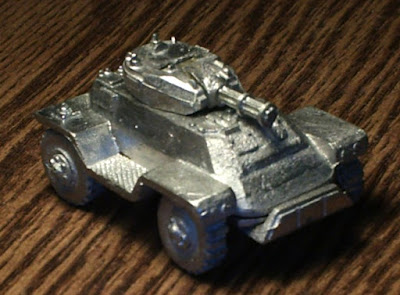 Second is an MBT, using a Khurasan Miniatures Red Banner tank, for another sci-fi use:

I'll prime them sooner or later; I think I'll paint both with a "dirt planet" (Mars) rust-red/black/brown camouflage scheme.

A problem I have with that tank is that the barrel is a very heavy metal part, and thus has sunk down toward the chassis despite good amounts of contact glue.
Posted by Omer Golan-Joel at 7:44 AM