Dark Nebula - Back to the Roots! 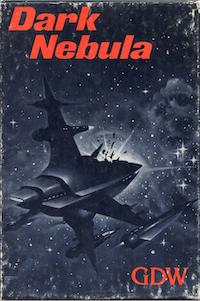 I have been thinking about the worldbuilding and "4X" aspects of my Dark Nebula Traveller OTU variant. I tried to do the economic worldbuilding using Trillion Credits Squadron and Fifth Frontier War. However, both came out a bit off to my taste, filling the small two-subsector Nebula Region with hundreds of big ships and vast planetary armies. While epic in scale, and officially Traveller, they were a bit... Overwhelming.
Thus, I went back to this setting's roots, and will use the Dark Nebula and Imperium boardgames for this sort of worldbuilding. Just as intended! Why also Imperium? Because I think that some of the changes in the transition from Imperium (the original game) to Dark Nebula (the sequel) do not go too well with this sort of worldbuilding. Oh, and I also like Motherships and Fighters, as in Imperium!
So, here is my Unified Dark-Imperium Theory!
So, these are the ground rules. In my next post, I will put these rules to use to determine the initial forces available to each faction.
Posted by Omer Golan-Joel at 6:59 AM