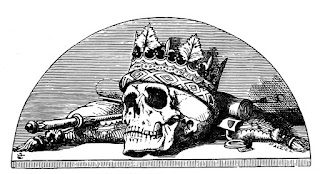 At its height, the Elysian Empire stretched from coast to coast, unifying the continent under the Emperor's might. It was a civilization of Law. Some say it was the greatest civilization since the dawn of man. Its wealth, beyond any dream, streamed from the many provinces to the shining city of Elysia. Its magnificence is now a matter of fables. Fought over by pretenders, claimants, and would-be Emperors, it is now a dead, burnt-out shell of its former glory. In the place where one Emperor ruled, now several compete. In a land once shepherded by a single Bright Pontifex, five Pontiffs claim the title, each endorsing his own usurper to the throne.

The land was always cold. Some scholars speak of an earlier, warmer age. Others claim that our forebears came from another continent to the west, refugees from the encroaching ice. Now and then, doomsayers and preachers lecture about the ice and winter being sent to purge the world of the sins of man. The Elysian Empire once ruled the southern part of the continent, where climate allows bountiful agriculture, from the forests of Valukarask to the wheat and barley fields of Camalynn. Ice chokes the North. Great animals, from mammoths and cave-bears to woolly rhinoceros ("unicorns") and sabertooth cats, roam the land, especially the northern taiga and tundra. Men domesticated the mammoth as a beast of burden; the nomads who prowl the icy tundra claim that they herded mammoth eons before the men of now reside in Elysia came to their shores.

The Empire's state religion is the Bright Church. Worshipping the Conquering Sun, called Sol Victa in Elysia and Amon-Ra in the warm south, it preaches Law and follows the Pontifex. Or, to speak of current events, the five Pontiff-claimants. Having overthrown the Chaotic cults of the old Sorcerer Kings, Lysandrus of Elysia brought Law and Church to the neighboring lands by sword and fire. Competing with it is the Grey Church, also known as the Penitents, fanatically Lawful. These followers of the Flayed Lady see pain as the pathway to penitence and spiritual purity. They view martyrdom as the pinnacle of faith a believer can achieve, and wounding of the mortal flesh as a road to clearing one's soul of dark Chaos. While both Churches have won the hearts of the common man, many peasants also worship the Neutral pagan Old Gods, just like they did when the Chaos-worshiping Sorcerer Kings lorded over them. And in the darkness, Chaos promises, as it eternally does, infinite power - and the price of untold destruction and corruption. Head among the cults of Chaos is the so-called Dark Church of the dread god Apep, lord of undeath and dark sorcery.

The following is an early work-in-progress of the western part of the former Elysian Empire. Elysia itself is to the east of this map. There is much, much more I should add to this map and will add in the future. 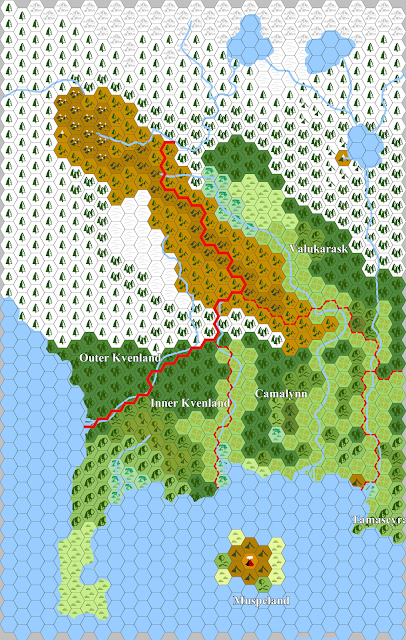