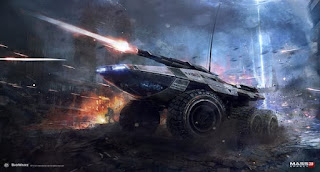 I have written these rules with the typical Books 1-3 Proto-Traveller spirit in mind. That is, for the purpose of including vehicles in the various adventures and mishaps of interstellar travellers, traders, scouts, and misfits, as well as small-scale mercenaries. I did not aim in any way to simulate large-scale armored warfare but rather to provide some basic rules for what happens when your Scout empties his Submachinegun at a hovering Air/Raft or, at most when a mercenary shoots a RAM grenade at an AFV.

I drew inspiration for these rules from the Book 2 ship damage rules, the ATV rules in Double Adventure 2: Mission to Mithril/Across the Bright Face, and for a much lesser degree, the Striker wargame.

Skill Notation
For the ease of reference, "Throw Mechanic 8+" means "throw 2D and add the Mechanics skill; a result of 8+ is a success" and so on.

Vehicle Movement and Chases
Vehicle combat is either Tactical or Chase Combat. Tactical Combat is ordinary Book 1 combat with a vehicle included, usually moving at a slow pace of up to 4 range bands per round. On the other hand, Chase Combat ignores terrain for the most part and involves two or more vehicles chasing each other. This also uses range bands, though they are far wider than those involved in Tactical Combat; their exact length is abstract. Throw the appropriate Vehicle (or Air/Raft or ATV) skill at 8+ to either get further from the opposing vehicle by one range band or get closer to it by one range band. The driver or pilot may also throw 10+ once per round with the appropriate skill (DM +2 if DEX 10+) for a better position - that is, either gain DM +2 to hit the opposition or force a -2 DM on the enemy's to-hit rolls on him. Vehicles who leave the Very Long range band disengage and the pursued vehicle escapes. Particularly slow vehicles such as Tracked ATVs suffer a -2 DM to such maneuvering rolls, while fast vehicles such as Air/Rafts enjoy DM +2. Extremely fast airborne vehicles such as Speeders and Jet Aircraft use the aircraft hit rules below.

Hitting Vehicles
Hitting a vehicle with a man-portable weapon is an ordinary combat task. Throw 8+ to hit, add the appropriate weapon skill and characteristic DMs, as well as range DMs. Ignore armor DMs as I have covered the effects of vehicle armor in the tables below. Vehicle-mounted weapons use the Gunnery skill instead and the appropriate range modifiers. On a hit, consult the appropriate damage table.

Hitting a fast-moving vehicle suffers DM -2. You cannot hit fast, high-flying aircraft without specialized tracking weapons, but you can hit a slower aircraft, albeit at DM -2 to -4 (Referee's discretion, depending on flight altitude or speed).

Vehicle Damage
To keep things within a Little Black Book scope and flavor, these rules abstract the many types of weapons and armor into three broad categories each. Use the following table to see how each category of weapons affects each category of vehicle armor and choose the appropriate damage table to roll on. Each weapon his causes one roll on the appropriate damage table.

Small Arms: any regular personal weapons, whether a slug-thrower or a laser. All Book 1 weapons are Small Arms, as are the various rifles and pistols in Book 4. Light and medium machine guns also fall into this category.

Support Weapons: heavier man-portable weapons carried at the squad level or light vehicle weapons - such as Book 4 PGMPs, heavy machine guns, autocannons, Light Assault Guns (AKA Anti-Tank Rifles) with High Explosive or Discarding Sabot rounds. Most grenades, whether hand-thrown or RAM, fall into this category as well, including grenade launchers.

Soft Skin: an unarmored vehicle, whether civilian or military. In Book 3 terms, this includes the Ground Car, Hovercraft, all Winged craft, Air/Raft, Speeder, and Motorboat.

Light Armor: a lightly-armored vehicle such as an armored car or light APC. In Book 3 terms, this includes the ATV and G-Carrier.

Heavy Armor: a heavily armored vehicle, such as a heavy APC (or IFV) or a tank. In book 3 terms, this includes the AFV, the Steamship, and the Submersible (due to size rather than armor for the most part).

For damage, roll on the appropriate tables below:

Bounce Off: Shot has bounced off the vehicle's skin or armor. No damage.

Device: One secondary external device, such as a light fixture or antenna, was destroyed (Referee's discretion).

Locomotion: The vehicle's locomotion, such as wheels, treads, or propeller, was damaged. Ground vehicles lose half their speed from the first Locomotion hit, and stop completely with the second hit. In case of a single-engine aircraft, this might cause a crash; throw Vehicle (Winged Craft) 8+ to land safely (DM +2 if DEX 10+), otherwise this is a crash causing a roll on the Critical Damage table. In case of multi-engine aircraft, this causes a -1 DM to all Vehicle (Winged Craft) rolls per disabled engine and will be at risk of a crash if all engines are disabled. Grav vehicles have enclosed grav-lift modules and are immune to this case of damage. Watercraft will be dead in the water and subject to currents and drift until the characters repair its locomotion. Throw Mechanic 8+ to repair damaged locomotion.

Breach: If the vehicle is pressurized, its environmental seal is breached, exposing its occupants to the environment. Can be repaired with a vacuum seal patch or a Mechanic 6+ throw.

A breached watercraft begins to leak, reducing its speed by one quarter and inflicting a cumulative -1 DM to all throws related to the vehicle's steering. Four such breach hits will cause the watercraft to take in water and begin to sink. This only applies to small watercraft; large ships such as Steamships and the larger Submersibles stay afloat from such minor breaches. Only a Knocked Out critical result (see below) will sink such large craft.

Weapon: One of the vehicle's weapons is disabled and may not fire. AFV (and other tank) main cannons are immune to this in most cases, but their secondary weapons are not. Throw Gunnery 8+ to repair a disabled weapon.

Transmission or Suspension: The vehicle's transmission or suspension is damaged. A wheeled or tracked vehicle is immobilized. A Grav vehicle may only move up or down. For aircraft, throw Vehicle (Winged Craft) 11+ to land safely (DM +2 if DEX 10+), otherwise this is a crash causing a roll on the Critical Damage table. Field repairs of damaged transmission or suspension are difficult and require a Mechanic 10+ throw (DM +1 for INT 10+). At a workshop, this throw is easier, at Mechanic 8+.

Crew: 1d6 crewmembers are injured at 3D damage each.

Main Weapon: The vehicle's main weapon is damaged and disabled. This includes AFV (or other tank) main cannons. Throw Gunnery 10+ to repair a disabled weapon.

Power Plant: The vehicle's power plant takes a direct hit and the vehicle is disabled. Each occupant must throw 8+ (DM +1 for END 8+) to avoid taking 3D damage. In case of a aircraft or grav vehicles, this might cause a crash; throw Vehicle (Winged Craft) or Air/Raft 10+ to land safely (DM +2 if DEX 10+), otherwise this is a crash causing a roll on the Critical Damage table. This cannot be repaired on the field.

Knocked Out: The vehicle is rendered completely and irreparably inoperable. Furthermore, each occupant must throw 8+ (DM +1 for END 8+) to avoid taking 3D damage. Aircraft crash, causing 6D damage to all occupants. Low-flying Grav vehicles crash, causing 3D damage to all occupants; if they are flying at a high altitude or at high speed, this increases to 6D damage. Watercraft, include large ones, suffer massive hull breaches and will sink within 1d6 combat rounds.

Destroyed: Vehicle destroyed. On ground vehicles, crew must throw 10+ (DM +2 for DEX 10+) to bail out with "only" 6D damage. Otherwise, they are killed immediately.

Optional Rules
The following rules are somewhat more complex than those above; the Referee should use them at her discretion.

Called Shots: Many armored vehicles have weak spots. If you use this optional rule, if the Referee rules that the character knows of a specific vehicle's weaknesses, the character may roll to attack at DM -2 to hit a weak spot. Characters may only do so up to Medium range unless using guided or tracking weapons. If the attack hits, consider the damage as done by one "category" of weapon higher, that is - Support Weapons behave as Heavy Weapons. This does not apply, however, to Small Arms, except for Book 1 Laser weapons and the various Book 4 weapons using specialized armor-piercing ammunition. Discovering an enemy vehicle's weaknesses may be an adventure of its own; alternatively, the Referee may call for a throw of Tactics 10+ (DM +1 for INT 9+) to discover the target's weaknesses by observation and deduction. Note that also in this case, weapons "shifted" above the Heavy Weapons "category" will destroy the target on a successful hit.


You may now download these rules in PDF format from HERE.
Posted by Omer Golan-Joel at 9:49 AM