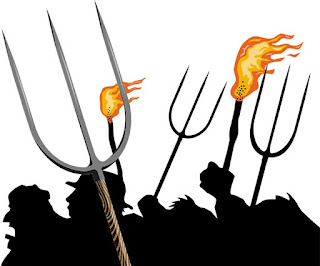 Yesterday I posted Classic Traveller variant rules for Grunts, Mobs, and Monsters and I have been requested to convert them to the Cepheus Engine. So here is the Cepheus version of these rules!

Anyhow, sometimes the Referee would want to create a situation in which the player characters face a large number of undisciplined, unskilled combatants - an angry mob of locals with torches and pitchforks, looters in a disaster - or even a zombie horde! As per the Cepheus Engine combat rules, as written, this will create much paperwork and die rolls as each member of a mob suffers wounds to their characteristics and makes their attack rolls at the DM-3 "unskilled" level.

I wrote the following variant rules to reduce that paperwork and die-rolling load and thus facilitate situations in which skilled PCs face a large number of unskilled or minimally skilled combatants. Additionally, I added rules for relentless monsters which do not easily die from accumulated wounds.

Streamlined Armor
The Cepheus Engine uses the default armor system from the 2D6 Sci-Fi SRD. That system presents armor as a damage absorber - i.e. it subtracts the target's armor rating from any attack's damage. For the sake of simplicity when dealing with the combatants presented in this blog post, I propose a simpler armor system. Under that variant system, armor does not absorb damage but rather incurs a negative DM to incoming attack rolls, as presented in the following table:

Mobs
A mob is a number of untrained irregulars who lack adequate combat training or tactical awareness. They may be enraged or even fanatical, but will typically rush at their enemies instead of employing a more cautious tactical approach. As noted above, the classical "low-tech local peasants chasing the spacemen with pitchforks and torches" or "zombie apocalypse" are good examples of this theme.

Each mob includes up to 12 members. In many cases there will be multiple mobs involved. Do not track individual characteristics, damage, or skills of mob members. The mob moves as one unit. It makes a single attack roll per round. Make this roll at an effective "Skill-0", with DM+1 for every four active members in the mob, or part of four. Thus, a big mob of 12 members will attack at base DM+3, modified, of course, by weapon and range DMs; a mob of 5 members will attack at base DM+2. Make the attack as if the mob is one character; use automatic fire or shotgun rules as usual. While the entire gang might be unloading a hail of bullets, these shots are badly aimed and only a few have a chance of striking true.

PCs attack the mob as if it is one target. Most mobs are either unarmored or wearing Jack or Mesh armor; apply DMs accordingly. A non-automatic ranged attack which hits the mob incapacitates one member; if its Effect is +4 or better, it incapacitates two members, one from the bullet and another from "Shock & Awe". When autofire, a shotgun, or a grenade hit a mob, a number mob members equal to the attack's Effect are incapacitated. Obviously, as with single shots, "incapacitated" does not necessarily mean "killed by a bullet" but rather "out of the fight" - killed, wounded, or maybe just shocked enough to be ineffective in fighting. The latter is the reason why autofire can incapacitate above 4 mob members while a Cepheus Engine autofire burst only contains 4 bullets.

Mobs are much more dangerous in melee, with a to-hit DM+1 per 2 members rather than per 4, and making two attacks per round rather than one. When skilled characters fights a mob in melee, they "cleave" - each hit incapacitates a number of mob members equal to the attack's Effect, up to the character's relevant melee skill.

Mobs rarely fight well under fire. In any of the following cases, throw 5+ for the mob to disperse in panic and be effectively removed from the fight. This number rises to 8+ for frenzied mobs. Fanatical mobs are immune to this effect and will continue swarming the PCs regardless of death. Reasons for such morale throws include:
A "Rabble Rouser" character with the Leadership skill may attempt to rally a dispersed mob by a Leadership, INT, Difficult (DM-2) throw.


Grunts
Conscripts out of basic training, as well as street criminals with some combat experience, fight far better than a mob of rabble. Whoever, they still are not a match for professionals. Grunts fight individually, as per the standard rules, including movement and attacks. However, they have a total DM+0 base modifier (from skill, characteristics, etc) to hit targets, subject to armor DMs and range difficulty. Any attack which hits a grunt incapacitates them. Grunts use morale laws as above, with a throw of 8+ (apply any sergeant's or officer's Leadership skill as a -DM to this throw); this roll refers to the grunts' unit or squad, which may be broken

The Referee might also want to consider various small-to-medium-sized wild animals, but not apex predators or particularly large animals, as grunts.

Monsters
Sometimes, felling a monster is not a simple matter of riddling it with bullets or chopping it one piece at a time - it just keeps fighting! In this case, attack the monster as per the Cepheus Engine rules, and roll damage on a hit. However, do not count accumulated damage. Instead, ignore any attack which does 14 or less damage. Any attack doing 15 or more damage kills the monster. For particularly fearsome monsters, make that 16 or less damage; this monstrosity will continue fighting even under a hail of bullets until a lucky attacks rolls 17+ damage (which is unlikely on the typical gun with 3D6 damage).
Posted by Omer Golan-Joel at 2:18 AM