The lessons of Mass Effect for military sci-fi RPG campaigns

The Mass Effect trilogy is one of the best computerized sci-fi RPGs in existence, with the first game earning a 89% rating on Metacritic (the second game even got 94% and the third again 89%). In it's most basic essence, Mass Effect is a third-person shooter with RPG elements, set in a wide open galaxy with an enormous number of worlds open to exploration. It boasts one of the better and more interesting sci-fi settings ("IP". as it is customary to call them these days) of the past decade, complete with a magnificent story, a wide-open galaxy, and multiple alien species, all with interested, detailed histories and cultures. This is a rebirth of sorts of the "space opera" genre, supplanted somewhat by hard sci-fi and nano-punk in the early years of the century. It stands at the same level as Star Wars, Star Trek and Babylon 5 - a true beauty to behold. But here I will talk about one specific aspect of these games, which has little to do with the combat mechanics or even with the specifics of the universe. I will focus on the first game as it has the most "classic" structure in this regard. 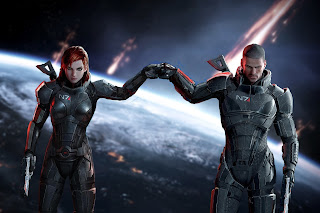 What Mass Effect did very well is build a military sci-fi RPG campaign. Generally speaking, military sci-fi RPGs have to deal with three main challenges. The first is how to justify a diverse team of characters - as typical for a group of player characters - in a military setting. Typically militaries are highly uniform, heavily regulated environments, and all the odds and ends you see in the typical RPG campaign stick out like sore thumbs in a military setting. The second is that, in a quasi-realistic military situation, the command team of a starship, or any other group of ranking people calling the shots and having agency (freedom of action), rarely see direct ground combat action. Instead, they command their subordinates to do much of the actual fighting. But players love to have both agency for their characters and get into the thick of things with guns blazing. Third, even if the characters are a command team on an independently-operated starship, in military settings you usually have a clear chain of command and relatively strict orders to operate under.

How does Mass Effect solve all of this? It puts the player in command of a small team of elite operatives, who are further removed from the usual military chain of command by being galactic-government special operative (i.e. a Specter and his/her entourage). The player still serves the military on the long run and in the big picture, but he or she still ahs much freedom of action. The powers that be give him/her a large-scale mission, and the military gives him smaller tasks to accomplish, but since Shepard (the protagonist) is a Specter, he or she can act as desired on the smaller scale. Furthermore, with this semi-military semi-special-agency milieu, Shepard can recruit various assistants, some of whom are mercenaries, rebels, and renegades. Whatever gets the mission done. Finally, as Shepard and his/her entourage are special-forces soldiers in addition to Shepard being the captain of the ship, they do get to carry out commando missions. The rest of the command crew and ship officers do not participate in such missions. This would be an interesting framework for a tabletop sci-fi RPG; detached-duty special forces and/or ranking government agents, rather than being directly subjected to chains of command and rigid micromanagement by superiors.

The overall plot structure is also of interest for the tabletop military sci-fi RPG player and referee. One may call it a quasi-sandbox. Following a short exposition, Shepard becomes a Specter and gets his/her command of the Normandy, and then the galaxy opens up. He/she gets three leads to check in search of the villain he/she is after, but can explore the wide-open galaxy. Around the galaxy, there is a good number of side missions, sometimes hinted at by NPCs and sometimes found by exploration. The typical side mission - sometimes small "dungeons" and sometimes in more open locations is one to three "scenes" (or encounters) long, typically closer to one than to three; on the tabletop, one could probably finish one of these side missions in a single session of play, and the bigger central-plot missions in around three sessions of play each. The player may approach the three leads and the side missions at his or her order of preference, and usually has some choice regarding their outcome, sometimes significant choice which will affect the plots of later games in the series as you can import saved games from game to game. Once you explore the three leads you enter the main chase after the villain, which is essentially two big plot missions and the final battle.

Finally, the way characters are built and used is also of interest. The big villain of Mass Effect is built very well - given a strong exposition - you actually see the big villain in the very first tutorial mission and given ample reasons to go after him with extreme prejudice and the game revolves after getting to the point where you can actually lay your hands on him and stop his infernal plan. There is a big surprise in store for the player in regard to the villain, but generally speaking, you get a strong villain from the first minutes of the game. The NPCs are also interesting - except for one or two more relatively generic human characters who - if they survive - become more interesting in later games in the series. Each alien character is interesting, has a strong personality and a detailed history - and each has his or her own side-quest. All appear in later games and develop into central characters of the series.

All in all, interesting from the point of view of an RPG gamer interested in military sci-fi games.
Posted by Omer Golan-Joel at 6:12 AM