Regarding skills in Classic Traveller 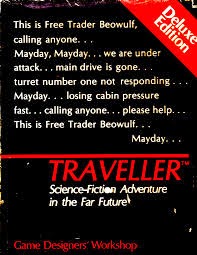 On this thread on the Citizens of the Imperium Boards, people discussed the Classic Traveller skills, their meaning, and whether or not a typical Book 1 character is playable. I'll give you my views on this.

One (1) skill point is a profession. Enough to hold a job and make a living. The average non-adventurer, non-military and non-criminal civilian probably has one or two skills at 1 and probably a few at 0. For example, a professional mechanic would have Mechanic-1 and very likely also Ground Vehicle-0 (he has a driver's license) and possibly Steward-0 (if he knows how to cook and is a good host). On a vacuum world he'll also have Vacc Suit-0. Skills above 1 denote specialization; for example, a paramedic would have Medic-1, a nurse Medic-2 and a full doctor Medic-3. Colonists on dangerous frontier worlds will probably have a few weapon skills at 0 as well, but not too many - say, Carbine-0 or Shotgun-0.

This is a multi-skilled professional. He can work as a programmer; work as a gunner; and work as vacc suit technician or EVA specialist. He has THREE full, money-earning professions. He is also HIGHLY educated and very smart. If he were an adventurer, he'd also have all Book 1 (but not Book 4) weapons at 0, and probably also a vehicle skill at 0. He can hack, he can shoot all common guns (though he isn't a marksman), he can fire big guns with professional skill, he can work very well in zero-G/vacuum, and probably can drive/pilot a vehicle as well. He can even wear Combat Armour with no penalty! Very playable.

Look at it from the old-school D&D angle. Your Fighting-Man has, essentially, skill-0 in all weapons at level 1; later on he gains a higher skill (in CT that would be in specific weapons). old-school D&D Fighting-Men do not have any other skills on their character sheet. Yet they're perfectly playable.

Another way to look at it - in D&D 3.xE/D20, CT skills are much more akin to feats than to 3.xE/D20 skills. A weapon skill is like a Weapon Specialization feat in that weapon. Medic is essentially a "Medic I" feat (allows you to be a Medic on a starship and treat wounds where one characteristic has been reduced to zero with no roll needed) and its advanced/"Greater" feats, "Medic II" (gives you a bonus to revive low-berth passengers) and "Medic III" (allows you to treat all wounds - including serious ones - with no roll needed). Vacc Suit is like an "Armour Proficiency" feat.
Posted by Omer Golan-Joel at 11:47 PM