The Space Cockroach is Getting Published! 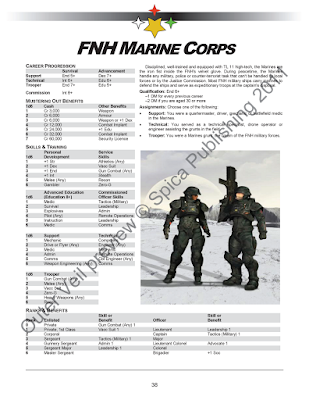 Yep, I'm getting my own first book published by Publishing! And its going to be available in PDF format NEXT WEEK! Woohoo!


Spica Publishing is pleased to announce that Outer Veil will be released on 30 October 2011!

THE YEAR IS 2159 AND THE FRONTIER NEEDS YOU.

Written by Omer Golan-Joel with Richard Hazlewood, with art by David Redington and Michael Thomas, Outer Veil is a completely new game universe for Traveller, set in 2159 AD in the space around Sol.

As mighty as they are in the Core Worlds, the Federated Nations of Humanity government and the Megacorporations cannot act directly on the Frontier, which is a month or more away even for the brand-new Jump 2 couriers. To exert their power to these distant stars, they need you to go there on their behalf and act as their eyes, ears, and hands away from home. The FNH government needs reliable administrators who can think on their feet, loyal military officers to project its force, and determined Justice Commission agents to uphold the law where the colonial authorities cannot.

The Megacorporations want results and want them now and demand people who can get results fast, by any means necessary. They also need researchers, explorers, and workers for their projects on the frontier and spies and mercenaries for the darker side of inter-corporate competition. The locals need you, too: as a professional, a hired gun, an explorer or as a fellow colonist. You need the Frontier, too: opportunities and adventures abound there for both the hireling and the freelancer.

The Frontier is large, deep, and wide open. Humanity's young sphere of interstellar space is surrounded on all sides by unexplored space. At the edge of this tiny sphere lies the Outer Veil, a partly-explored, sparsely-settled region of space separating the known and the unknown. Despite its best efforts, the Core has little influence in these dark reaches, and nearly anything can be found there: unsanctioned colonies, pirate enclaves, secret laboratories, alien ruins, isolationist groups, strange worlds and colonies scraping out a living on the edge of the Great Unknown.

The space beyond the Outer Veil is unexplored, unknown and undisturbed by human exploration, habitation or influence. The future of Humanity lies beyond the Outer Veil, where untold opportunities, riches and dangers await the trail-blazing explorer. The present human institutions hold little or no power amongst these far stars; whatever lies beyond the slowly expanding Outer Veil is an enigma waiting to be explored and colonised: a new opportunity for Humanity to begin anew and build new civilisations.

Authority is scarce and your bosses, if any, are weeks of Jump travel away from you. The Core can only give you general guidance and standing orders; when trouble strikes, you have to make your own decisions. If you are the captain of a patrol frigate, the commanding officer of a Marine detachment, a colonial governor or a Justice Commission agent, you are the government. If you are a trouble-shooter or a local exec for a Megacorporation, you are the company. And if you are a freelancer, you truly are independent.

In the Outer Veil you are on your own.

Outer Veil will be released on Sunday 30 October 2011 as a PDF download from Spica Publishing’s publisher page at DriveThruRPG.com, price $14.99.

A selection of preview pages from Outer Veil from Spica Publishing are presented below.

Requires the use of the Traveller Core Rulebook, available from Mongoose Publishing.
'Traveller' and the Traveller logo are Trademarks owned by Far Future Enterprises, Inc. and are used with permission.
Posted by Omer Golan-Joel at 10:29 AM