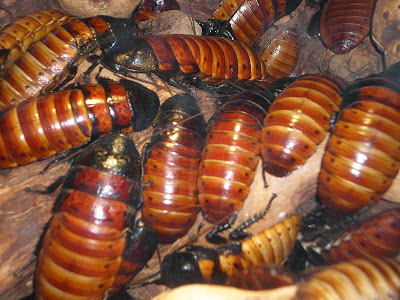 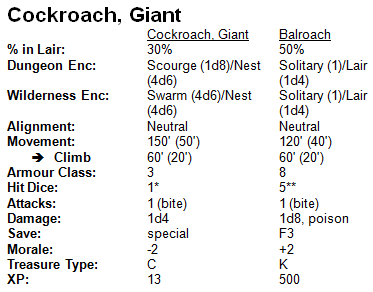 The Giant Cockroach is a giant - and particularly disgusting - version of the common cockroach, reaching up to 2 feet in length not including antennae (which add another foot!) and weighting about 40 pounds. While giant cockroaches feed on trash and other smelly substances found in sewers and not on flesh, and are cowardly insects to boot, they will fight to defend their nests and territories, and may stage an opportunistic attack on weak adventurers. Note that while a giant cockroach saves as a level 1 Fighter against most attacks, it saves as a level 10 Fighter vs. poison and is immune to most disease-based attacks. The Geckomen of Queddar consider these insects to be a delicacy and raise herds of them in fenced-off cave warrens, fattening them on refuse to be roasted over the campfire.


The Dreaded Balroach, on the other hand, is a horribly nauseating cockroach larger than a horse. While it is an omnivore and scavenger rather than a predator, it will fiercely defend its lair and may see weak adventurers as food. Its horrid appearance and unsightly behaviour make it a menace whenever it emerges from its sewerly warrens to scavenge in the dwellings of men! The Balroach is immune to poisons and diseases. Besides its powerful mandibulae, its disgusting appearance and horrible smell offer it protection; any adventurer who comes within sight of a Balroach must save vs. Poison or suffer from a severe nausea, causing a -4 penalty to all attack rolls, saving throws and proficiency checks.
Posted by Omer Golan-Joel at 9:01 AM