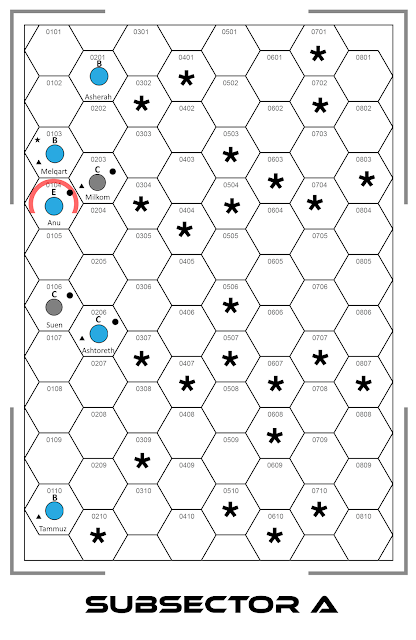 I have been working, one world a day, on Sector 23. Here are the first seven worlds in the project!

An otherwise marginal colony, Melqart housed an Imperial Naval Station before the Collapse, with a Scout attachment. When the Star Empire fell, Melqart’s population retained both the advanced starport and a few naval assets, which they still maintain, albeit at a partial level. Their fleet, however, is aging, and they can only manufacture replacement small craft locally. Melqart lacks the industrial might to become even a regional power, but its strong martial roots and remaining advanced facilities permit it to repel foreign intervention and keep pirates away from their system. However, this still leaves Melqart as a prime target for technological larceny.

A dry but otherwise hospitable world, Anu was devastated by a pandemic - potentially a bioweapon - during the Collapse. The few survivors live in three isolated, tiny tribes in the ruins if past civilization. Developing an effective vaccine for that pandemic would permit re-colonization, and several neighboring worlds are developing such technologies to open up Anu for their own colonization.

Suen is a small, remote, but active, mining colony. While it lost part of its population to migration during the Collapse, it did retain its technological base and starport, and was thankfully not a frequent target for raiders. Suen has a well-known Antediluvian site, which was already excavated and explored centuries ago during Imperial times, but rumors persist of further, untapped sites deep within the local cavern systems.

Tammuz is a “breadbasket” world, a prime agricultural technology with a population of 80 millions. While its technology partially regressed following the Imperial Collapse, it still aggressively exports food and other agricultural products. Its main weakness, however, is its balkanized nature, with three agricorp-dominated “trading blocs” vying for control over their market shares. So far, violence was kept at the tolerable level of petty border skirmishes, but tensions are slowly increasing in the past few years, opening the possibility of all-out war.

The jewel of the subsector, Asherah is a pleasant, well-managed rich world boasting the highest living standard in the Subsector - or so its government claims. Originally ruled by a self-proclaimed Emepror who cited continuity-of-government rules to declare himself the true ruler of the (dead) Star-Empire, such regime was short-lived. Following a successful coup, and a short-lived Revolutionary Council, Asherah developed a stable civil-service bureaucratic government. However, while the so-called Emperor is long dead, rumors have it that his family still plots to regain control of Asherah and build a new Empire funded by this world’s wealth.

Themes: comfort; sleepy but friendly bureaucracy; plots and intrigue under the surface.

Milkom is a minor transit station on the Main going to the Trailing from Melquart. The government of Melqart operates this station, maintaining a starport crew of approx. 500 people on-site. The station can produce lower-grade (unrefined) liquid hydrogen fuel (and water) by chemical means from Milkom’s soil, but lacks the equipment to refine it. Melqart also permits the Scout Guild to operate a small base on Milkom for the benefit of interstellar communications. One must note, however, that Milkom was overlooked and held a small transit station even at the height of the Star Empire, so much of its extensive cave systems are barely mapped. Who knows what may await deep in these caves…

When the Empire fell, Ashtoreth, an under-populated frontier world, was settled by the staff of its Scout Base, most of whom became farmers. Only a few still operate the old base, as well as the small starport. The local culture is informal, as is the government. The main threat to the locals’ way of life, however, is the sorry state the remnant fusion power plant is in; it was a TL15 model, so spare parts are rare. The locals are looking for such parts, and slowly building a fission plant as a failsafe.

Apocalyptic Swords & Wizardry - Food, Fuel, Bullets, and Parts: The Currencies of the Future

First things first: when discussing a gonzo post-apocalyptic setting, the simplest foundation to build upon is the economy. Or, more specifically, common resources often serving in trade or as treasure: fuel, ammunition, and mechanical/electronic parts. The necessities of post-apocalyptic "civilization", if one can call it so.

The basic economic unit in my version of the gonzo apocalyptic future is the Trade Unit (TU). A TU is the worth of enough food for one person for one day. In the less-contaminated parts of the Slag Marsh, water drinkable by mutants who survived for generations on untreated water. In more arid settings, the water required by one person for one day is also worth a TU. Food for one day weighs 2 pounds.

Pre-Collapse vehicles, as well as jury-rigged post-Collapsed vehicles use fuel. I won't go as far as to differentiate the various kinds of petrol products, as an abstraction, a Can of Fuel weighs 10 pounds (just as a US "Jerrycan" weighs) and is worth 100 TU. (Fuel can also serve to create Molotov Cocktails, 10 per Can of Fuel.

Making bullets is relatively easy with certain mechanical tools and chemical supplies a post-apocalyptic town with access to pre-Collapse scrap. However, the standard dirty bullets, made after the Collapse, are inferior to advanced bullets, made before it with mass industrial technology rather than in a post-apocalyptic cottage industry. Dirty bullets are standard; they also jam the gun on a natural result of 1 or 2 on the 1d20 attack roll. The rarer advanced bullets never jam the gun and enjoy a +1 bonus to both attack and damage rolls. Bullets (as an abstraction) come as either handgun ammunition, rifle ammunition, or shotgun shells. 50 bullets of any type weigh 1 pound. 10 dirty bullets cost 1 TU; a single advanced bullet is worth 1 TU.

Food, Fuel, Bullets, and Parts may serve as "coinage". Of course, when finding a stockpile of fuel, the intrepid scavenger will have to be careful when carrying such valuable, but flammable, load back to "civilization"... Note that the most valuable "currency" compared to its weight are advanced bullets, at a worth of 50 TU per pound.

Posted by Omer Golan-Joel at 10:02 AM No comments:

My first post in this blog for 2023 is an idea I am thinking about for quite a while: writing a post-apocalyptic hack for Swords & Wizardry: Core or Swords & Wizardry: Complete. As I noted before, I am returning to Swords & Wizardry from other d20 OSR rulesets (such as OSE and before that, ACKS), as S&W has a growing community here in Israel, and I am very actively involved in writing material for it in both Hebrew and English. I also know that S&W is extremely hackable, perfect for creating variant rules.

Now, why hack S&W for an apocalypse? After all, I have my own 2d6 post-apocalyptic game, Cepheus Atom, and there are several other prominent and excellent gonzo-apocalyptic games, most notably Mutant Future by Goblinoid Games and Mutant Crawl Classics by Goodman Games. However, Cepheus Atom is less suitable for the dungeon crawling I had in mind, and I find Mutant Crawl Classics to be a bit too random for my tastes; I am also less fond of some of the design choices in Mutant Future (such as the significant starting hit points).

So, here I am, hacking S&W: Core/Complete for gonzo-apocalyptic gaming, as a side project. Right now, this is a "hobby" project, but it may get published in the future.

What do I want from my hack? 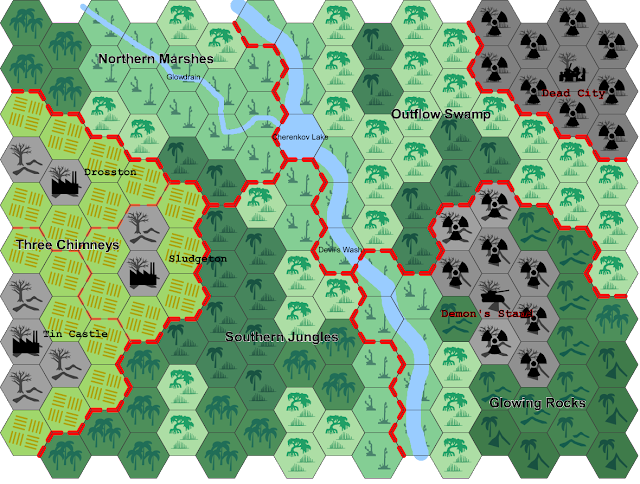 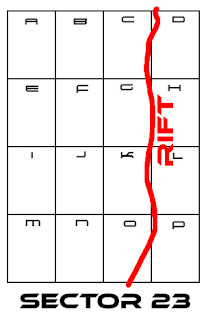 A new writing challenge is spreading like wildfire in online TTRPG spheres: the Dungeon 23 Challenge. Create a 365-room megadungeon (or other TTRPG location) in 2023, one room a day. Sean McCoy, who initiated this challenge, wrote it, urges the creators taking up this challenge to not overthink things, and use generators whenever possible.

I initially thought about creating a post-apocalyptic Bunker 23, but I had trouble choosing a post-apocalyptic dungeon crawl ruleset (I have certain reservations with using Mutant Future, and Other Dust is sometimes a bit too weird for my tastes). I did consider hacking Swords & Wizardry: Core to suit my needs, but that defeats part of the simplicity inherent in this setting.

So, back to my usual haunts! A Proto-Traveller sector rolled one world a day, with me writing at least one paragraph of descriptive text for each such world. Approx. 30 worlds per subsector. As a Traveller sector has 16 subsectors and a Terran year only has 12 months, I decided to add a rift - a (mostly) empty region of space to this sector, encompassing subsectors D, H, L, and P.

For the rest, before each month, I will prepare a "dot map" of star locations in the subsector, with a number of stars equal to the number of days in that month, then fill it in with actual worlds, one day at a time.

I'll write this up digitally, and gradually post here on my blog what I came up with.

Here is the "dot map" of Subsector A: 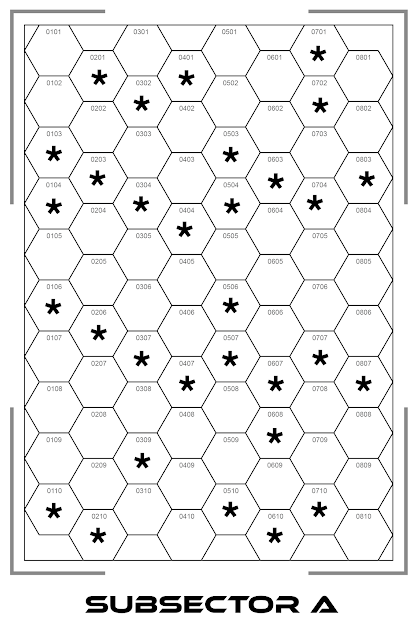 A few initial setting notes before I start rolling up worlds tomorrow:

I am pleased to announce that we at Stellagama Publishing have recently released Cepheus Deluxe: Enhanced Edition!
Among the changes from the original edition, one can find:
And more!


Get the new book HERE!
Posted by Omer Golan-Joel at 10:10 AM No comments:

My journey through the OSR landscape was a long one. After abandoning D&D 3.xE in 2008 or so, I moved to the Basic Fantasy RPG (BFRPG). This rekindled my joy of fantasy role-playing, after an almost-burnout by 3.xE, where I felt that prepping game material is a menial chore. In BFRPG, I could simply run with the game and have fun, even as Dungeon Master.

Afterwards came Lamentations of the Flame Princess; the Adventurer, Conqueror, King System (ACKS), a short bout of Swords & Wizardry: White Box, and, finally, settling on Old School Essentials (OSE) as my go-to fantasy RPG. However, things have changed recently, and I am returning to Swords & Wizardry!

The reason is that Swords & Wizardry is enjoying rapid growth here in Israel. After the core book was translated in the previous decade, a local team gathered and created an actual Beginner Kit boxed set! This costs 99 NIS (approx. $30 USD) and includes all the rules necessary to play the game up to level 5, as well as dice and two adventures! This Kit is now sold in multiple game, toy, and book stores across Israel, ready to bring new players and Game Masters into our hobby!

This opened the floodgate to a burgeoning ecosystem of supporting books, especially adventures, put forth both by the local translation team, and by third parties. This happens while D&D 5E is unavailable in Hebrew (other than its mostly-unformatted SRD) due to licensing issues. While most adult Israelis know English relatively well, children are rarely fluent in it, and even many adults prefer to run and play games in our native tongue. So, the game is growing exponentially here!

I am also behind the local (Hebrew) Swords & Wizardry fanzine, the Fighting Agama, which already published two issues, and a third one is already in the works - this is intended to be a bi-monthly, or maybe even later monthly, publication.

Thus, I am switching over, for all my "D20 fantasy", to Swords & Wizardry!

Disclaimer: The Hebrew version of Swords & Wizardry is based on Swords & Wizardry: Core by Matthew J. Finch (https://swordsandwizardry.com/). The translation was performed by Itai Greif, Michael Gorodin, Eran Aviram, Itai Horev, and Eran Ben-Saar. the local team is unaffiliated with Frog God Games or Mythmere Games.

A post-apocalyptic Classic Traveller setting I am thinking about is as follows, briefly, as a more elaborate and less standard replacement for Harsh Beginnings:

What do you think?