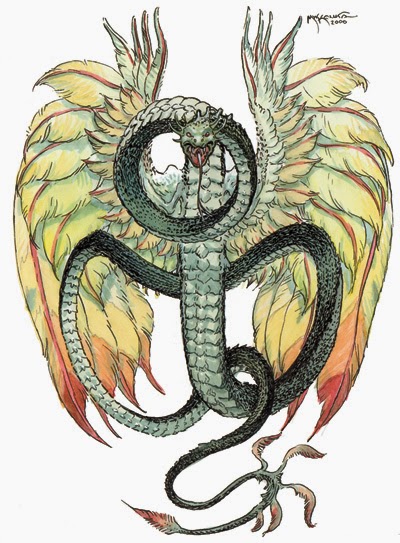 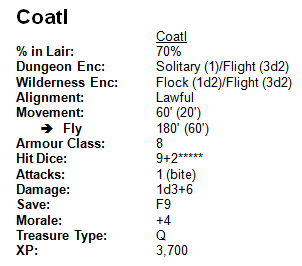 The mighty Coatl is a servant and emissary of Ixchala, the Lawful goddess of Lizardmen. This feathered serpent – actually, a feathered and winged cross between a serpent and a monitor lizard – is 12 feet long, with a wing-span of 15 feet. It vibrates in a rainbow of brilliant colours as it flies through the clouds. For Lawful Lizardmen, this is a harbinger of good luck and hope. For the Serpentmen of old, however, this was the harbinger of their destruction by Ixchala's righteous wrath. Highly intelligent and imbued by virtue, the Coatl seeks to protect the innocents and the cause of Law – of Lizardman civilization – and to punish the followers of Chaos.

A Couatl uses its ESP ability on any creature that arouses its suspicions. Since it is highly intelligent, a Couatl usually casts spells from a distance before closing. If more than one Couatl is involved, they discuss their strategy before a battle. Coatls may constrict their foes with their long, serpentine body - on a successful hit on an enemy, the Coatl constricts its victim for an additional 2d8+6 points of damage. The constriction continues on subsequent rounds. The hold may be broken on a roll of 1 on 1d6 (add the victim’s Strength bonus to the range, so a Strength of 16 would result in a range of 1-3 on 1d6); breaking the hold takes a full round. Furthermore, any creature bitten by a Coatl must save vs. Poison or die in 1d6 rounds from its potent venom.

Coatls are imbued by Ixchala with potent mental and magical powers. At will, a Coatl may use Detect Evil, Detect Good, ESP, Invisibility and Dimension Door, and may communicate with any sentient creature telepathically regardless of language barriers. It may also casts spells as a level 9 Cleric. Finally, a Coatl may polymorph at will to the shape of any Lizardman-sized humanoid.
Posted by Omer Golan-Joel at 8:45 AM