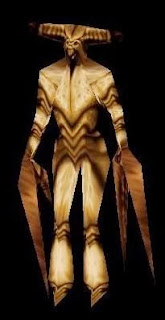 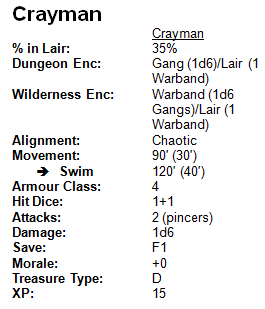 Craymen are hideous humanoid crayfish, standing 5'6'' upright and sporting sharp pincers instead of hands. They have a yellowish-brown chitin exoskeleton, and two red eyes on top of long eyestalks emanating from their hammer-shaped heads. Completely amphibious, a Crayman may live indefinitely on land or underwater. Craymen have a rudimentary intelligence and a primitive social structure, and communicate with each other using a series of inhuman clicks. They have the equivalent of Infravision, which works underwater as well. Craymen eat all kinds of watery life such as crabs, fish, crayfish and squid, as well as algae, but crave the taste of landlubber flesh, and, in addition, sacrifice any captives to their dread lord, K'tulu.
Posted by Omer Golan-Joel at 9:13 AM