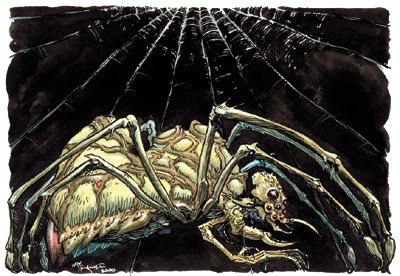 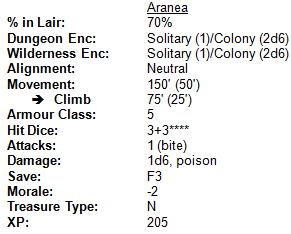 
An Aranea is an intelligent, shapechanging spider with sorcerous power. It is not necessarily an evil creature, though its spidery nature, combined with the creature's longevity, yields itself to plotting. In its natural form, an Aranea resembles a giant spider, with a humpbacked body a little bigger than a human torso. It has fanged mandibles like a normal spider. Two small arms, each about 2 feet long, lie below the mandibles. Each arm has a hand with four many-jointed fingers and a double-jointed thumb. An Aranea weighs about 150 pounds. The hump on its back houses its well-developed brain.

An Aranea’s natural form is that of a monstrous spider. It may assume two other forms. The first is a unique human-sized humanoid; an Aranea in its humanoid form always assumes the same appearance and traits. In humanoid form, an Aranea cannot use its bite attack, webs, or poison, but may cast spells, wear armour and use any weapon useable by a human being. The second form is a man-sized spider-humanoid hybrid. In hybrid form, an Aranea looks like a humanoid at first glance, but a successful roll of 16+ reveals the creature’s fangs and spinnerets. The Aranea, in this form, retains its bite attack, webs, and, but may also wield weapons and wear armour. When in hybrid form, an Aranea’s speed is 90' (30').  An Aranea remains in one form until it chooses to assume a new one. A change in form cannot be dispelled, nor does an Aranea revert to its natural form when killed.

An Aranea avoids physical combat and uses its webs and spells when it can. In a battle, it tries to immobilize or distract the most aggressive opponents first. Araneas often subdue opponents and hold them for ransom rather than poisoning or killing them; alternatively, the creature may offer its captured victim "an offer it cannot refuse". Any opponent bitten by the Aranea, however, widow must make a saving throw versus Poison; failure indicates death after 1 turn. Aranea may cast Arcane spells as a level 3 Mage; they prefer illusions and enchantments and avoids direct damage spells. In spider or hybrid form, an Aranea may also throw a web up to six times per day, as in the Web spell.
Posted by Omer Golan-Joel at 11:15 AM