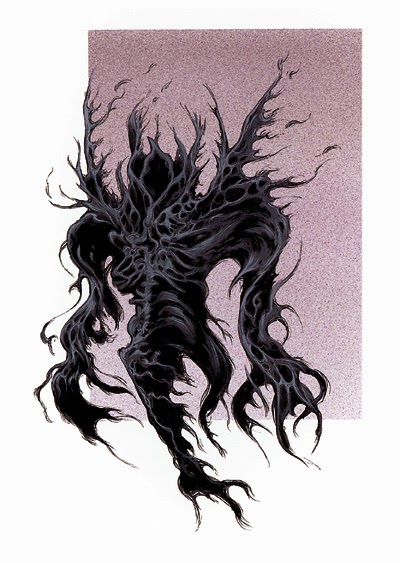 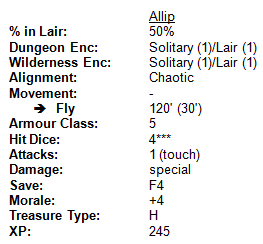 Sometimes, when a mortal, out of immense desperation and utter madness, commits suicide, his spirit lingers where he died, forever babbling in utmost insanity. An Allip is such a tormented spirit; it craves only revenge and unrelentingly pursues those who tormented it in life and pushed it over the brink. Alternatively, it haunts the place of its horrible death, a bane upon the living. This undead being appears as a distorted variant of its mortal form, swirling like mist in the air. Its touch is the touch of madness - when an Allip successfully hits an opponent, the victim suffers 1d4 points of damage, and 1 point of WIS is drained for 8 turns. Should a being be drained to WIS 2, it lapses into absolute madness, screaming and flailing at unseen visages. At 0, it permanently transforms into an Allip.


The creature also constantly mutters and whines to itself, creating a hypnotic effect. All sane creatures within 60 feet of the Allip must save vs. spells or be affected as though by a Hypnotic Pattern spell for 2d4 rounds. Creatures that successfully save cannot be affected by the same Allip’s babble for 24 hours. Also, Anyone targeting an Allip with an ESP, mind control, or other telepathic ability or spell makes direct contact with its tortured mind and loses 1d4 points of WIS until the next sunrise.


Like other undead, Allips are immune to the effects of sleep, charm, and hold spells. Allips are turned as Mummies.
Posted by Omer Golan-Joel at 9:22 AM