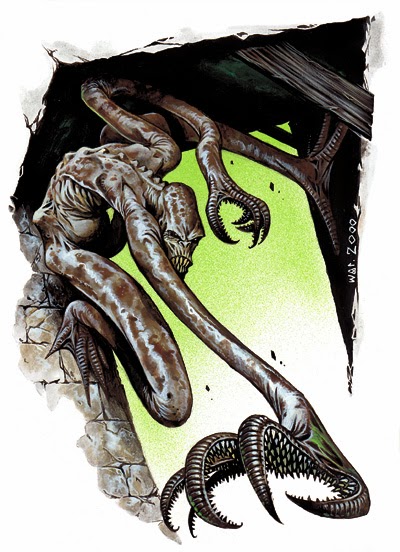 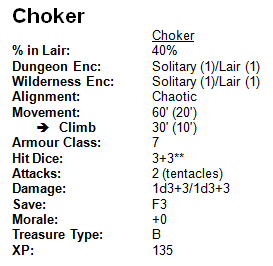 These vicious, tentacle-handed, predators lurk underground, grabbing whatever prey happens by to feast upon its flesh and bones. Its hands and feet have spiny pads that help the choker grip almost any surface. The creature weighs about 35 pounds. A choker likes to perch near the ceiling, often at intersections, archways, wells, or staircases, and reach down to attack its prey. A choker attacks creatures of almost any size, but prefers lone prey of its size or larger. If one is very hungry, it may attack a group, but it waits to grab the last creature in line. Once a victim has been grabbed by the Choker, the creature chokes him, dealing an automatic 1d3+3 damage to the victim each round until the victim either escapes (requiring a proficiency throw of 18+; for each point of Strength adjustment, modify the result of the die roll by +/- 4; characters with the Contortionism proficiency gain an additional +4 to this throw), dies, or the Choker dies. Although not particularly dexterous, a choker is supernaturally quick. It can take an extra action (such as an attack) or move during its turn each round.
Posted by Omer Golan-Joel at 9:18 AM