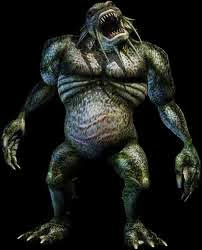 "I think their predominant colour was a greyish-green, though they had white bellies. They were mostly shiny and slippery, but the ridges of their backs were scaly. Their forms vaguely suggested the anthropoid, while their heads were the heads of fish, with prodigious bulging eyes that never closed. At the sides of their necks were palpitating gills, and their long paws were webbed. They hopped irregularly, sometimes on two legs and sometimes on four. I was somehow glad that they had no more than four limbs. Their croaking, baying voices, clearly used for articulate speech, held all the dark shades of expression which their staring faces lacked ... They were the blasphemous fish-frogs of the nameless design - living and horrible."
- H.P. Lovecraft, "The Shadow Over Insmouth" 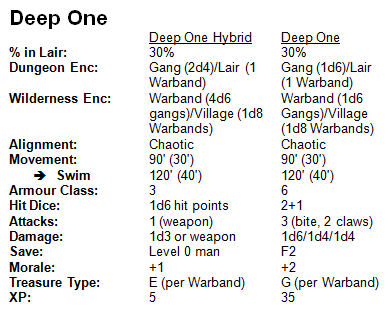 The Deep Ones are not content with living underwater, however. In service of their Chaotic masters, they seek to infiltrate coastal communities, intermixing with the local Human population, and tainting the blood of Men with their terrible curse. Indeed, the old, deposed nobility of Harat, mostly chased from their mansions and seaside castles by Hardun's Army of the Free, were, and still are, hybrids of Men and Deep Ones. This racial template represents these hybrids, who continually devolve from humanity to aquatic monstrosities.

A Hybrid is a 0 level Human tainted with Deep One blood; in addition to its abilities noted above, he may hold his breath for up to 1 turn (10 minutes), and sometimes uses this ability to ambush unsuspecting prey who wander near murky water. Without close inspection, however, Hybrids may pass for normal, if ugly, Humans, and they may use this fact to lure unsuspecting victims to their seaside villages, and even to stay at their inns, and then capture them and sacrifice them to their dread god K'tulu. They usually wear unkempt leather armour and fight using spears, tridents, hand axes and daggers. Each Hybrid gang is led by a ringleader with AC4, 1HD and 1d4+4 hit points. Each Warband is led by a war-chief with AC5, 1+1 HD, 1d4+5 hit points and +1 to damage and to hit due to greater strength. A Deep One Hybrid village will be led by a headman with AC 6, 3 HD and +2 to damage to to-hit from Strength; as long as he is alive, his cohorts will gain a +2 bonus to Morale; in addition, there will be a minor Priest of Dagon in each village, with AC 5, 3 HD, and spellcasting as a level 3 Cleric.

A full Deep One is a monstrosity combining the features of a man, a frog and a fish. It may breath freely both under and above water, has Infravision and is immune to disease and ageing. Deep Ones have thick scales protecting their bodies and attack with their claws and teeth. Each Deep One gang is led by a champion with AC 8, 4HD and +1 bonus to both attacks and damage from Strength. Each Warband is led by a war-chief with AC 8, 6 HD and +2 to to-hit and damage rolls due to his massive strength. A Deep One village is led by a prince with AC9, 8 HD, and +2 to damage to to-hit from Strength; as long as he is alive, his cohorts will gain a +1 bonus to Morale; in addition, there will be a Priest of Dagon in each Deep One village, with AC 8, 7 HD, and spellcasting as a level 7 Cleric.
Posted by Omer Golan-Joel at 8:05 AM