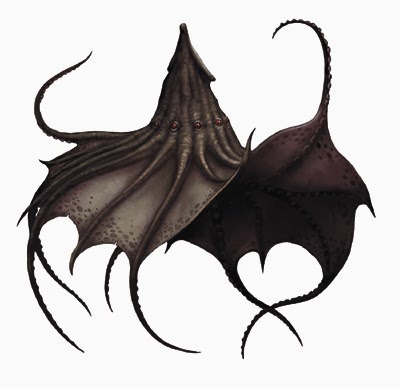 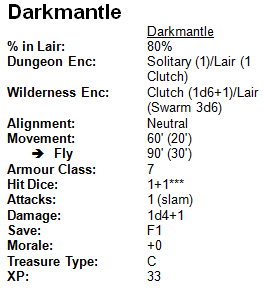 The many-tentacled octopoid Darkmantle hangs from a ceiling by a muscular "foot" at the top of its body. It can look like a stalactite, by holding its tentacles stiffly under itself, or like a lump of rock, spreading its tentacles so the membrane between them covers its body. Its shell and skin usually resemble limestone, but a darkmantle can change its color to match almost any type of stony background, and thus may surprise opponents on a roll of 4- (rather than 2-) on 1d6.  A Darkmantle is about 4 feet long from the tips of its tentacles to the top of its head. It weighs about 30 pounds.


In addition to its camouflage and surprise abilities, the Darkmantle has several unique abilities, making it an effective ambush predator in a subterranean environment. First, once a day, it may cast Darkness, as per the spell, as if cast by a level 5 Mage. Also, on a successful hit on an enemy with its slam attack, the Darkmantle constricts its victim for an additional 1d4+1 points of damage. The constriction continues on subsequent rounds. The hold may be broken on a roll of 1 on 1d6 (add the victim’s Strength bonus to the range, so a Strength of 16 would result in a range of 1-3 on 1d6); breaking the hold takes a full round. Finally, the Darkmantle may "see" in pitch darkness using echolocation, up to 90'; however, as it uses high-frequency sounds to locate its prey, a Silence spell effectively blinds the creature.
Posted by Omer Golan-Joel at 5:47 AM