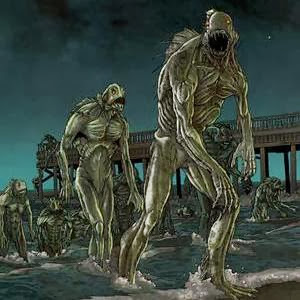 The Deep Ones are not content with living underwater, however. In service of their Chaotic masters, they seek to infiltrate coastal communities, intermixing with the local Human population, and tainting the blood of Men with their terrible curse. Indeed, the old, deposed nobility of Harat, mostly chased from their mansions and seaside castles by Hardun's Army of the Free, were, and still are, hybrids of Men and Deep Ones. This racial template represents these hybrids, who continually devolve from humanity to aquatic monstrosities.


Experience Point Progression After 8th Level
Deep One Hybrids increase the amount of experience required to gain each level after 8th by 40,000XP.
Posted by Omer Golan-Joel at 7:04 AM