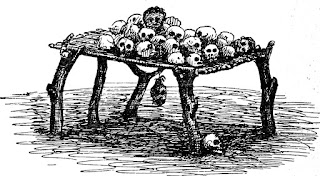 Sorcerers. The dread of normal men, who huddle behind their walls in fear of the feared men and women who wield unearthly power. Scourge of the stalwart warrior and barbaric brave, who cower from the sorcerer's eldritch might. Horror of eternity, steeped in the occult in life, terrifying in eternal undeath when they transcend the grave.

Sorcerers are the latter half of "Sword and Sorcery", the first half being the courageous sword-wielding barbarian who dares face such magical power. An archetype of a spellcaster, in many cases a monstrous villain, but sometimes a valuable ally.

Sorcerers are studious spellcasters, like mages - they have a limited spell repertoire and must study and record tomes to cast spells. However, they can also rebuke (turn) and control undead like clerics, and their spell list combines healing, summoning, and necromantic magic, essentially bridging the gap between the divine and the arcane. Sorcerers are far better summoners than either a cleric or a mage - calling forth powerful creatures at low levels. They have, however, two weaknesses. The first is that they lack effective blast skills and are unable to use divination or illusion spells. The second is that their magic is shaded. As given in Axioms #1, in the article "The Shades of Magic", this means that many sorcerous spells constitute black magic and are thus dangerous to the caster's soul. As these spells tend to be very powerful, the temptation is great. Power corrupts.

In a typical ACKS campaign, sorcerers can exist alongside traditional divine and arcane magic. They represent older, riskier magical traditions lacking the various wards and safety measures of arcane and divine magic. In a more "hardcore" sword & sorcery campaign, they might replace arcane and divine spellcasters altogether.

The sorcerer is human. Thus, sorcerers have 4 build points using the ACKS Player's Companion. The class build is as follows:

Total 1,800xp to rise to level 2 - not bad at all. Somewhere between a Cleric and a Fighter.

Sorcerers fight like thieves, may wear leather armor and fight either with a two-handed weapon or with two weapons, but they have a limited selection of weapons - swords/daggers and bows/crossbows. Where advanced technology exists, they may also use various guns and technological swords and daggers.  This means a trade-off - reducing weapon selection from Broad to Narrow for 2 powers at level 1!

Spellcasting resembles the mage and so does saving throw progression. Sorcerers have all magical research capabilities of mages. You can find the sorcerer's spell list here.

I trade the 2 powers at level 1 for 1 power at the 3rd, 5th, and 7th levels. Special power progression is as follows:

Level 7: After the Flesh (grows in power after undeath!)

Now, the next step is to codify all of this into a proper, coherent class...
Posted by Omer Golan-Joel at 8:42 AM