[The Scrapyard] Carcosa Re-Imagined with Stars Without Number?

I own a copy of the very cool, high-production-value hardcover version of Carcosa by Geof McKinney, an ultra-weird horror-fantasy-sci-fi setting by Lamentation of the Flame Princess. This setting, if you recall, had some controversy going around it due to the very horrific (and utterly perverted) nature of some dark magical rituals contained therein. Anyhow, this is heavy metal sword & sorcery played to the hilt, and over-the-top, with aliens, robots, Cthulhu, dinosaurs, lasers and terrible sorceries, all intermixed with loin-clothed barbarians with strange body colours. 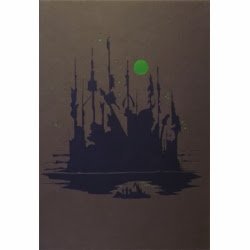 Despite the utmost coolness of this setting, it does have some weaknesses, such as the utter lack of hope (in a sense, what your characters do means very little in the big picture), which is suitable for Call of Cthulhu but not very suitable for the D&D type of heroic sword-and-sorcery, as well as the very random nature of the game mechanics added in Carcosa.

So one of my "scrapyard" projects (i.e. ideas I keep stashed for a time I'll have more free time on my hands) is a Carcosa Redux of my own, similar to Carcosa Rehab by Tales of the Grotesque and Dungeonesque's Jack. That is, keeping the coolness of Carcosa while editing out the less interesting, and more random, bits.

And for that, I think I found the perfect ruleset: Stars Without Number, as well as its Post-Apocalyptic supplement, Other Dust. They have plenty of rayguns, robots, machines, aliens and psionics between them, as well as ample rules for low-tech combat, for a particularly enjoyable game of Carcosa Re-Imagined.

If I will pull this off, this will mean converting the various creatures and artefacts of Carcosa into SWN stats, as well as using the Other Dust settlement rules for Carcosa villages.

What do you think?
Posted by Omer Golan-Joel at 8:22 AM