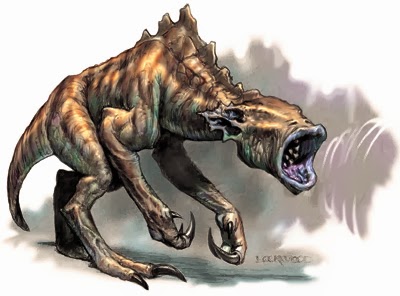 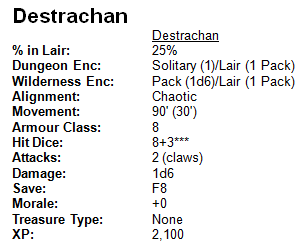 The dungeon-dwelling Destrachan looks like some bizarre, nonintelligent dinosauroid, but it’s an incredibly crafty sadist with a sharp, malign intellect. A Destrachan has a pair of complex, three-part ears that it can adjust to be more or less sensitive to various sounds. It is blind, yet hunts with a sense of hearing more precise than most creatures’ sight. From its tubular mouth, a Destrachan emits carefully focused harmonics, producing sonic energy so powerful it can shatter a stone wall. So skilled is a Destrachan at controlling the sounds it emits that it can choose what type of material to affect with its attack.  A Destrachan is about 10 feet long from its mouth to the tip of the tail and weighs about 4,000 pounds. It uses echolocation to find its way unerringly in the dark, as if it possessed perfect eyesight. Lacking real eyes, however, this monster is immune from gaze attacks or any other effects based on eyesight, and, furthermore, saves against sonic or other auditory attacks as a level 12 Fighter. The Destrachan uses its claws only as a last resort or to finish off foes weakened by its sonic attacks. It often enters battle with surprise if possible. It first focuses on destroying metal armour and weapons and then changes to harmonics that disrupt flesh.

The Destrachan's main offensive power is its Destructive Harmonics – a powerful sonic attack. The creature may blast sonic energy in a cone up to 80 feet long, or, alternatively, it may also use this attack to affect any creatures or objects within a 30-foot radius. It can tune the harmonics of this destructive power to affect different types of targets. First, it may disrupt soft tissue and rend bone, dealing 4d6 points of damage to all living beings within the affected area (a save vs. Paralysis is allowed for half damage). Alternatively, it may focus its harmonics on knocking out foes rather than slaying them; this attack deals 6d6 points of nonlethal damage to all within the area (a save vs. Paralysis is allowed for half damage). Finally, when using a third form of harmonics, a Destrachan may choose between wood, stone, metal, or glass. All objects made of the chosen material within the area of affect are shattered on a roll of 15+ (if carried by a character or creature, the carrier may save vs. Paralysis instead in order to avoid losing the object. Magical or advanced technological objects are immune from this attack.
Posted by Omer Golan-Joel at 7:31 AM