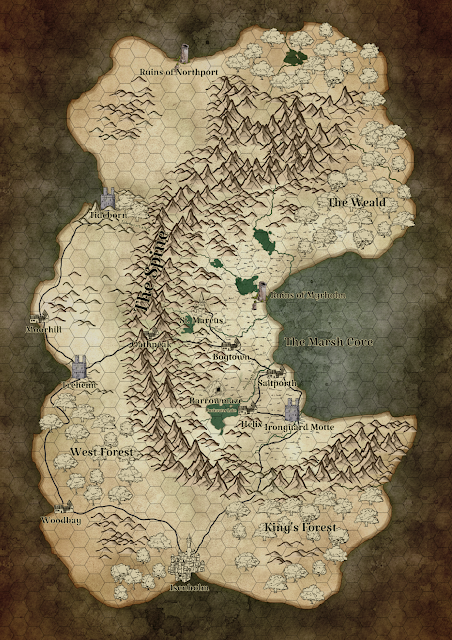 This is a setting for the OSR game ACKS, in which I intend to run Barrowmaze, as well as other OSR and Old D&D modules, and a general sandbox.


High Concept
In the millennium since the Elysian Empire withdrew from the island of Lyonesse and, eventually, collapsed, Lyonesse grew into a prosperous kingdom (principality in ACKS terms). However, internecine warfare, followed by plague and famine, devastated its population. Where busy trading and fishing ports once stood, now ruins stand empty. Where fields yielded a wealth of wheat and barley, swamps now sprawl. King Rolf IV at Isenholm, at the southern coast of Lyonesse, holds nominal dominion over the entire island. In reality, he reigns over a half of his forefathers’ kingdom, and even that includes three largely autonomous vassal duchies. Beyond that - abandoned wilderness reigns supreme. And in this wilderness, bandits, Swine, and worse hold sway. Chaos seeps through the cracks of dying Lyonesse and engulfs it from the north. Will heroes arise to turn back this tide of Chaos, or will darkness consume the island?

The year is EY (Elysian Year) 1666 - an accursed year. War rages in the Mainland. Years of warfare, plague, and famine have devastated the countryside on the Island of Lyonesse. King Rolf IV, who - on paper - rules the island from its traditional capital of Isenholm, reigns over its southern, mostly forested, part. Three dukes owe him fealty, but their coffers and barracks are as empty as his. The rule of Law is weak even in the king’s own domain and disappears completely in the northern half of the Island.

The largest city - the only “proper” city - in modern-day Lyonesse is Isenholm, on its southern coast. It is the King’s personal domain, and where Law holds sway - at least in theory. It grew bloated with refugees fleeing plague and famine in the north, and today extensive slums sprawl beyond the city’s old walls. Petty nobles vie for power with its walls, ever competing with the Wardens - heads of the three competing syndicates. The overworked City Watch is infested with graft and bribery; the Grey Church takes its place, in certain neighborhoods, in enforcing the Law - but is more concerned with hunting Chaotic heretics than with petty theft and gang rackets.

The two Churches of Law tend to the people’s spiritual needs. The Bright Church, led by Archbishop [the term replaces Patriarch for the Bright Church in this setting], offers solace and promises of salvation. However, rumors abound of corruption among its ranks and even infiltration by Chaotic clerics. Matriarch Vindicta heads the Grey Church, worshiping the same Divine with an austere zeal. Ever distrustful of temporal nobility and royalty, the Grey Church rallies the faithful against Chaos and its many agents - actual or imagined. The peasantry, however, while faithful to the Church’s Conquering Sun - which the Grey Church calls the “Divine” - also seek the aid of the old Pagan [Neutral] gods, who sometimes offer concrete guidance where the Churches only pontify about Divine Wrath or distant Salvation.

Beyond the Royal Domain lie three Duchies. There used to be six. Two have fallen to Chaos and to the Swine [this setting’s porcine Orcs], one - Tideborn - is now far from its past glory and in the firm grasp of Chaos under the Blood Duchess Isabel - who is rumored to bathe in the blood of virgins to remain eternally young. But Treheim, Ironguard, and the Forest Duchy still stand on the side of Law - even if tenuously so.

Civilized rule extends from the southern shore to the southern branch of the Spine Mountains, encompassing the entire Forest Duchy and the southern half of Treheim Duchy. Beyond this are the Borderlands - extended as far north as Castle Treheim itself on the western coast and Bogtown on the eastern coat. Further north is wilderness, infested with Chaos, bandits, Swine, and all sorts of vile monstrosities. There lie the ruins of the one-great cities of Myrholm and Northport - abandoned due to plague and Chaotic attacks and now the province of Swine and vile men.

From the central Spine mountains, the Swine Prince - the fattest and vilest of Swine - leads his miniature but growing domain. The Swine hordes are, so far, content with harassing Ironguard and Treheim, but their numbers are growing with the years, and Men fear their desire for conquest and plunder. An independent Swine band is no match for a proper military force, but, led by their Prince, the Swine Horde strikes fear into the hearts of Men.

From Myrholm, the Lizard God - rumored to be a dragon or dragon-spawn - terrorizes the Marsh Cove. Two years ago, Bogtown endured the Scaled Legion’s onslaught, saved, at a great price, by Duke Ironguard’s army. The wildest lands, however, lie to the north of Myrholm, Tideborn, and the Central Spine - infested with the vilest of creatures who took up residence in the abodes of Men when the latter fled southward following the Plague and the Famine Year.

Darkness gathers. The one-proud Island of Lyonesse no lies in shambles. For the prospective adventurer or mercenary, opportunities abound. Opportunities to gain vast wealth by exploring ruins, by allying with any of the many factions - or, eventually, by rising with an iron will to fulfill dreams of conquest and lordship.
Posted by Omer Golan-Joel at 12:48 AM