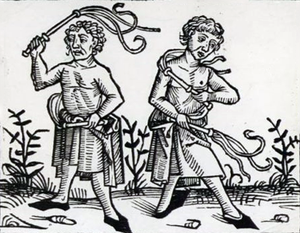 The followers of the Flayed Lady see pain as the pathway to penitence and spiritual purity. They view martyrdom as the pinnacle of faith a believer can achieve, and wounding of the mortal flesh as a road to clearing one's soul of dark Chaos. Their cleric, therefore, is the flagellant - marching through the corrupt mortal world to call the sinful to repent and flogging her own flesh to ward away the bestial call of the carnal body.

An iconoclast, an enemy of slavers, resentful of the haughty, the flagellant fights with zeal. She may lack the martial training of an ordinary cleric of the Invincible Sun, but makes up to that in burning religious fervor. A simple robe or a leather armor to her skin, she carries her two characteristic flails to rend the flesh of the Chaotic idolater and the mortal tyrant.