Monster Monday: the Dragon and Flying Eye for Classic Traveller! 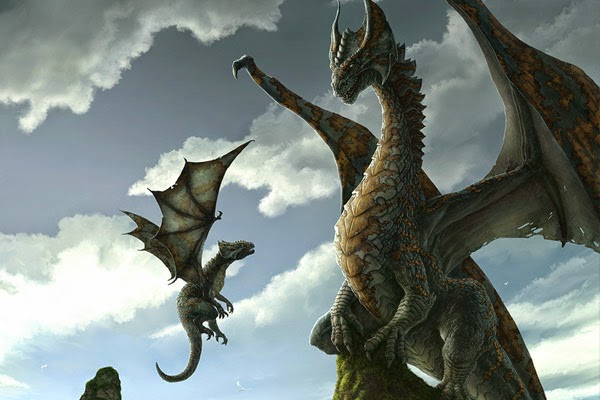 Beyond the Frontier... Here Be Dragons! And Eye-Monsters too! With FULL Classic Traveller rules and stats to boot!

The Dragon is a large airborne predator native to a Size 5, Atmosphere 8 world far beyond the Frontier. Its fire-breathing capabilities stem from the fact that it could siphon and filter methane from its digestive tract and store it in two large sacks at its belly. The gas is then pumped through its mouth and ignited by a bio-electric spark-generating organ in its thorax. The dragon carries enough methane in its sacks for 5 combat rounds of breathing fire; they will refill after a good meal and 6D6 hours of rest.

Every time a Dragon is hit with an explosive, incendiary or high-energy weapon, roll 9+ for its methane sacks to catch fire, painfully killing the creature by setting it ablaze. Alternatively, a character may attempt to aim directly at these sacks with a DM of -4; on a successful hit when aiming in such a way, any explosive, incendiary or high-energy weapon will set the Dragon on fire. Of course, if all of the methane in the sacks has been used up, ignore these rules.

A dragon's fiery breath uses Shotgun range and armor DMs; like a 'proper' Shotgun, it uses the Group Hits by Shotguns rule (Classic Traveller Book 2 p.42). Additionally, after a hit is scored, the target catches fire on a roll of 8+ and thus continues to take additional 1d6 damage per round until the flames are put out (taking two full combat rounds of dedicated efforts, or one round using a fire extinguisher).

A dragon's skin is strong, scaly and very light. A suit of armor may be made from this skin, requiring a roll of 10+ (DM +Mechanical skill) and 1d6 weeks of work; a failed roll ruins the skin. This armor is similar to Jack Armour in shape and weight, but will provides the protection of Cloth. 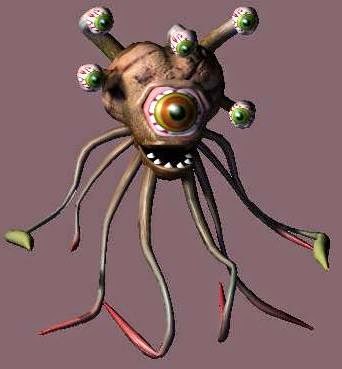 The Flying Eye looks like a large (2m diameter) warty sphere with one huge central eye and a big, toothy mouth. Around its head, the Flying Eye has 1d6 small (10cm diameter, 60cm long) "eyestalks" and eight tentacles protrude from its lower body, serving as manipulating digits. Most of the Flying Eye's body consists of a huge hydrogen bladder; the gas is a by-product of the creature's digestive process. The hydrogen has two uses: first, it allows the creature to float in the air, and second, the Flying Eye uses this gas to fuel a special organ resembling a hydrogen/oxygen fuel cell. The electricity generated by this organ serves as its main energy source (in other words, the creature is "powered" by bio-electricity). In addition, the Flying Eye can "burn" greater than usual amounts of hydrogen to power up its "eyestalks" - though this procedure tends to eat up its hydrogen reservoir rather quickly.

The "eyestalks" are not eyes - only the central eye serves as a visual organ - but rater natural laser weapons! The Flying Eye may "fire" any or all of its "eyestalks" in one turn and may target one creature per "eye". The "eyestalks" use the range and armor DMs of the Laser Carbine and do 4D damage. However, the Flying Eye's body holds only enough hydrogen to power 2d6 shots in total. To fully "recharge", the Flying Eye must eat a good meal (say, one unfortunate traveller) and digest it for 3d6 hours.

Every time a Flying Eye is hit, roll 8+ for its hydrogen bladder to rupture, killing the creature. However, if any explosive, incendiary or high-energy weapon has ruptured the gas bladder, the hydrogen ignites, "attacking" everything within a 5m radius using the armor DMs or a 40mm RAM grenade, causing 4D damage on a successful hit.
Posted by Omer Golan-Joel at 11:43 PM