Hereby I present you with... The Aboleth and its Skum for Stars Without Number! 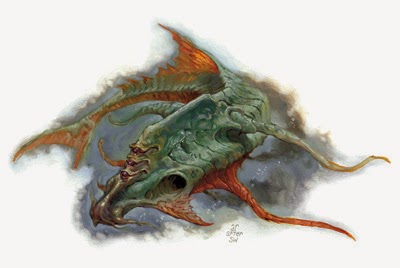 The Aboleths are old, unfathomable creatures, the product of aeons past, and practically immortal unless slain. They were old when the stars were young; they might have been old even when our galaxy has formed. Where they came from remains a mystery, as the Aboleths themselves are tight-lipped about their ultimate origin. But as each of them is old, their knowledge is enormous. They spend ages in their underwater lairs, brooding, plotting… With endless patience. A single Aboleth, intelligent beyond the human ability to understand, may be the centerpiece of a massive interstellar conspiracy, spun across the centuries towards an end known only to that alien mastermind.

The Aboleth itself is a revolting, green but pink-bellied, fishlike alien found primarily in subterranean lakes and rivers, or deep beneath the oceans on remote worlds. Four pulsating blue-black orifices line the bottom of its body and secrete gray slime smelling like rancid grease; it has four long tentacles used for grabbing, whipping and manipulating objects. It uses its tail for propulsion in the water and drags itself along with its tentacles on land. An Aboleth weighs about 3 metric tons.

An Aboleth in combat utilizes its vast alien mind, as well as its watery lair, to its advantage. First, three times a day, it may Enslave a sentient creature; the victim must save vs. mental effect, or become the Aboleth's mental thrall, fully under the creature's command. An Enslaved creature obeys the Aboleth’s telepathic commands until the Aboleth is killed, and can attempt a new save vs. mental effect every 24 hours to break free. The control is also broken if the Aboleth dies or travels more than 1 mile from its slave. An Aboleth may also use all the powers of the Telepathy discipline, up to and including level 8, at will.

A blow from an Aboleth’s tentacle might cause a terrible affliction due to the unique symbiotic bacteria and fungi who inhabit its skin and mucus glands. A creature hit by such a tentacle must save vs. physical effect or begin to transform over the next 1d4 minutes, his or her skin gradually becoming a clear, slimy membrane as it is digested by the microbes. An afflicted creature must remain moistened with cool, fresh water or take 1d12 points of damage every 10 minutes. The slime increases (i.e. worsens) the creature’s armor class by 1 (but never to more than 9). Use of the Purge Toxin Bio-Psionic power or a Medikit used with a Tech/Medicine roll at difficulty 9 before transformation is complete will restore an afflicted creature to normal. Afterward, however, only Pretech medical science may cure the affliction.

An Aboleth underwater surrounds itself with a viscous cloud of bacteria-rich mucus, roughly 30cm thick. Any creature coming into contact with and ingesting this substance must save vs. physical effect or lose the ability to breathe air for the next 3 hours due to acute microbiological infection. An affected creature suffocates in 2d6 minutes if removed from the water. Renewed contact with the mucus cloud and failing another save vs. Physical Effect continues the effect for another 3 hours. This effect may be removed by the Purge Toxin power or by a successful use of a Medikit with a Tech/Medicine roll at difficulty 9. 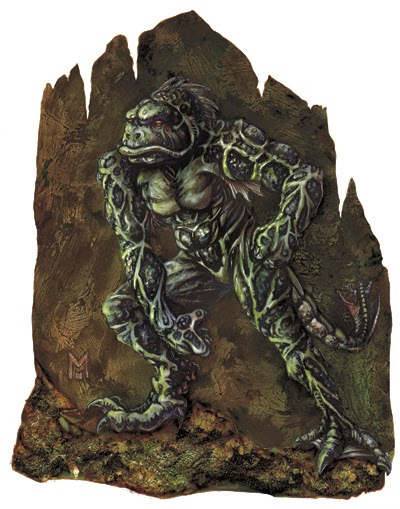 Many Aboleths breed Skum from their human captives - revolting fish-amphibian-like humanoids, who serve as their hand, ears and eyes outside their watery lair. They are produced by immersing a human or humanoid alien in Abol.eth-secreted microbe-rich mucus for several days, as well as possible psychic brainwashing. These creatures possess a slimy skin, and may breath indefinitely both under and outside of water. While sometimes armed with weapons, they also possess a powerful bite, as well as sharp claws. Skum lack much organization or willpower of their own, and show little initiative, but will fight to the death to protect their masters. Their presence usually signifies the existence of an Aboleth lair in the vicinity. No way has been devised yet to transform a Skum back into a human being.
Posted by Omer Golan-Joel at 3:36 AM