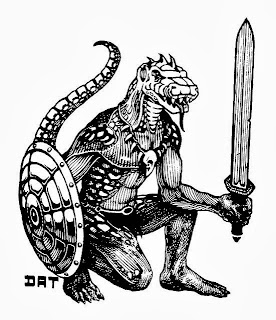 I've decided to remove the Inhumanity characteristic of Lizardmen, as they are relatively common and well-known even in the human lands of Kanahu; Geckomen will have this at -1, and Bugmen at -2 (or -4? they're VERY alien). This is especially true in the starting city-state of Harat where Lizardmen are 10% of the population (mostly freed slaves), compared to 0.9% for Geckomen and 0.1% for Bugmen.

Lizardmen are one of the three playable non-human races (the others being Geckomen and Bugmen) of the Barbarian Conqueror King setting  for the Adventurer Conqueror King System (ACKS). While other sentient species other than Men, Lizardmen, Geckomen and Bugmen exist in this world, most of them are monstrous and ardent followers of Chaos (Toadmen are an example of this). Lizardmen, on the other hand, exhibit a full range of beliefs and personalities, similar to what Humans do; some are Lawful and follow their goddess Ixchala; most are Neutral; and some are Chaotic and follow the dread gods of their old Serpentmen masters.

Lizardmen, as a race (for custom classes), are almost always taken at level 2, representing a Lizardman (or Lizardwoman). Levels 0 and 1 are described below for the sake of completeness the rare case someone would like to play a magically-bred hybrid between Humans and Lizardmen (which is a rarity, but could plausibly exist in this setting). Levels 3 and 4 are included for the sake of completness.

Lizardman 2 (XP Cost 850): At Lizardman 2, the character is a full-blooded Lizardman. He stands 6' to 7' tall, and has the head and tail of a lizard. His hands have evolved into sharp claws, his reptilian mouth is filled with fangs, and his skin has developed into a tough scaly hide. At Lizardman 2, the class will have the following five custom powers:
Lizardman 3 (XP Cost 1,350): Lizardman 2 + another level of Fighter.

Lizardman 4 (XP Cost 1,850): Lizardman 2 + two more levels of Fighter.
A Lizardman’s claw and/or bite damage will be modified by the character’s STR adjustment and damage bonus. However, Lizardmen cannot use their fangs and claws while wielding weapons, using shields, or wearing armour heavier than chain mail.
Experience Point Progression After 8th Level
Lizardmen increase the amount of experience required to gain each level after 8th by 35,000XP.
Posted by Omer Golan-Joel at 5:52 AM