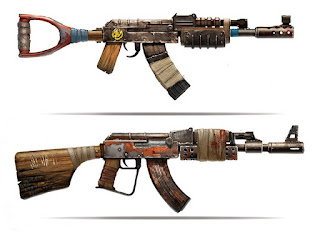 Two weeks ago I wrote here about my new setting idea for ACKS: a far-future post-apocalyptic setting which I now call Blighted Future. This takes place an indeterminate number of centuries into the future, after an apocalyptic war involving nuclear, chemical, biological, nanotechnological, and "exotic" quantum (read: reality-bending) weapons. The world regressed to a medieval society, where the majority of resurgent humanity toil in the fields in meager subsistence farming, ruled by feudal lords. The wilds are vast and dangerous, and ancient technology awaits in long-forgotten bunkers. In other words, this is "usual" ACKS set in an apocalyptic future.

The subject of this post is that of technology. Before the war, humanity was very advanced - capable of producing highly durable goods, energy weapons, wonder drugs, semi-sentient (or sentient in some cases) robots, and reality-warping "exotic" quantum weapons.

All of this went up in radioactive smoke when the bombs fell.

Current blighted future technology ranges from stone age to early Renaissance. The average, and most common, technological level resembles the Dark Ages. Dark ages with shields made from old traffic signs and plate armor made from pre-war boilers, that is. Crop rotation and stirrups, but nothing mechanized beyond the windmill and arbalest level. Bloomeries for smelting scrap metal, but rarely blast furnaces.

In terms of arms and armor, some city-states can manufacture firearms out of scrap, but these never exceed the flintlock level. Even then, unreliable trade means that the various materials necessary to manufacture good gun powder and firearms are expensive and in short supply. Most people use swords, bows, and spears - which are far easier to make from low-grade scrap or local materials. Scrap also allows primitive armor, but high-grade plate mail is rare as it requires better steel and craftmanship, which are uncommon.

Scholars, particularly sorcerers, sometimes learn how to manufacture wondrous technology resembling pre-war achievements. However, these are expensive and complicated beyond imagining. This has two reasons.

The first is that modern technology requires a vast manufacturing infrastructure. A village in early 21st century Afghanistan can manufacture AK-47s. However, this requires parts and materials produced by industrialized countries. Low-grade scrap is common in the blighted future. However, materials and tools good enough to assemble pre-war technology - even a good revolver, not to mention a laser rifle - are exceedingly rare and no living person or organization can produce them. The only exception are sorcerers in their abodes - and even they require high-grade pre-war parts for any complex technological project.

The second is a cargo-cult attitude to science and technology. Science is a way of thinking, and so is engineering. A modern-day scientist or engineer approaches problems in a skeptical and rational manner. Based on scientific knowledge, he knows how to deduce solutions from evidence. Not so in the blighted future. Centuries of primitive subsistence eroded this crowning achievement of modern thought. Instead, people approach problems from a mystical point of view and cannot separate superstition from fact. This includes sorcerers. Thus, they approach problems not from their underlying principles, but from their appearance.

For example, Blattus, a 9th level sorcerer, wants to build an assault rifle. He spends many sacks of gold on excellent scrap parts brought by adventurers from old ruins. He then researches the many texts written by previous post-war sorcerers on this subject - as pre-war blueprints are both impossibly rare and baffling to the sorcerer. Such tomes arose from experimentation. This experience includes a vast amount of superstition. For example, a previous sorcerer built an assault rifle, but during its construction he prayed to a dread idol. The gun worked, so he wrote down that this prayer helped. Add many layers of such flawed "deduction", and the entire production process becomes arcane.

In short, the lack of a technological base and magical thinking (which sometimes works! notice the "exotic" quantum weapons and their effects...) makes advanced technology indistinguishable from magic.

The other way to acquire advanced technology, of course, is to delve into ancient ruins and bunkers...
Posted by Omer Golan-Joel at 1:29 AM