Towards my upcoming Curse of Strahd campaign 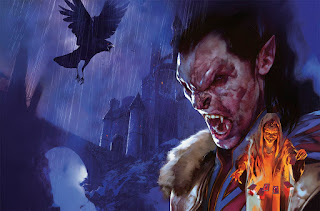 I intend to start DMing Curse of Strahd (an official D&D 5E campaign) for my group in a month or two. Thus, I have ample time to prep.

The first thing I wanted to figure out was how to get them together and bring them to the Death House.

They will start in a normal D&D world. Possibly the Forgotten Realms. They all happen to be passengers on a riverboat traveling an infrequently traveled river. The boat has other passengers as well - possibly even a higher level Wizard and his bodyguard.

On the second day of their voyage, the weather turns uncharacteristically bad - cold, wet, and foggy. The next morning, they find themselves floating in thick fog. The navigator says that her compass went crazy, but they should still be moving down the river and the weather should get better soon.

That night, ghouls attack the boat out of the shallow river water - led by two ghasts. The PCs sleep in the common area, which is the aft of the boat which is covered by a canvas canopy against rain. They will have to fight a gang of ghouls and one ghast who attack their area. Other passengers in their area (civilian NPCs) will get slaughtered before the PCs could respond.

When they start getting the upper hand in the battle, they will hear and see an explosion from the forward part of the boat - the cabin where the crew and the better-paying passengers stay. Apparently, the wizard panicked and tried to get rid of ghouls who cornered him - and miscalculated the effects of his fireball. The boat catches fire and the players have to finish off a few charred ghouls who escaped the blaze.

Soon after the PCs win the fight, heavy rain begins to pour, soon developing into a storm. This puts out the fire, but not before it causes the canvas, as well as the cabin's roof, to collapse. The ship is leaking badly from battle damage and will soon sink to the river bottom. It offers little shelter from the rainstorm.

If the PCs search the boat, they can gather some supplies, possibly a few minor magic items and potions once possessed by the now-dead wizard. They might also pick up a few NPC survivors - all non-combatant civilians.

Now they have to find a shelter from the rain - which means going ashore and into the surrounding woods. However, the trees offer little refuge from the storm.

Eventually, they wander and reach a lone house in the fog - the Death House. In my version of the adventure, the PCs will not encounter the "children" outside but rather enter the House in search of shelter and get trapped; then they will meet the "children" and the adventure will commence...
Posted by Omer Golan-Joel at 2:29 AM