These Stars Are Ours! 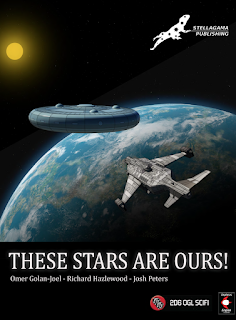 Over three years ago, I posted on this blog the first seed of what became These Stars Are Ours. The ideas underlying this setting ran in my head, in one guise or another, for over a decade before that. Today, I am proud to present you with the end result of all these years of dreaming, deliberation, and hard work - THESE STARS ARE OURS! - a full-scale new space-opera universe for the Cepheus Engine and other 2D6 OGL SciFi role-playing games.

Set in 2260 AD - two years after the Terrans took Keid and forced the Reticulan Empire to capitulate - it introduces the player characters to the immediate aftermath of the Terran victory in the Terran Liberation War against the mighty Reticulan Empire and its many thralls. For their part, the upstart Terrans, bolstered by their victory against their old masters, now move to become a power to be reckoned with in interstellar affairs. Against this background of espionage, maneuvering and saber-rattling, and on the new interstellar frontiers, the player characters can forge a destiny of heroes or villains of the new United Terran Republic. The book provides all the astrography and background necessary to set a sci-fi campaign in the exciting times of the 23rd century.

It is two years after we won the War against our old Reticulan masters. We - the children of Mother Terra - are now free to forge our destiny and put our mark on the stars. These stars are ours! This is a time for bold men and women to step up and claim the universe. We need intrepid explorers to discover the riches of our far frontiers; enterprising merchants to open new trade routes with far-away alien stars; cunning spies and agents to protect us from any alien plot against our hard-won independence; and of course - daring soldiers and spacemen to protect our borders and push back those who would enslave us again.

We are not alone - brave Cicek warriors and even Reticulan and Ssesslessian defectors fought along our side against the Reticulan legions. Against this mighty alliance, stand our many enemies - both internal and external. Corrupt politicians and crime-lords plot to turn our glorious Republic into their own plaything at our expense. Ruthless pirates and raiders rob far-flung colonies, heedless of the opening they give to our greater enemy. In the shadows, House Thiragin - the Reticulan noble house which once ruled Terra with an iron fist - plots and plans for its ultimate revenge on us upstart “barbarians”. For all of this - children of the Earth – Mother Terra needs you!

- History and background material for 23rd century Terra and the larger universe.

- Corporations, political parties, and illegal groups – both Terran and alien.

- 4 major alien species and several minor ones – all detailed.

- Rules for generating and playing characters from 6 alien species.

- The Terran Borderlands including 64 detailed worlds and a high-res star map.

Note that this book provides character generations, biological and cultural background, and flying saucers (!) for playing Grey Aliens from Zeta 2 Reticuli – ready to drop into any Cepheus Engine campaign!

Labels: Cepheus, settings, Stellagama Publishing, These Stars Are Ours!, Traveller, Visions of Empire