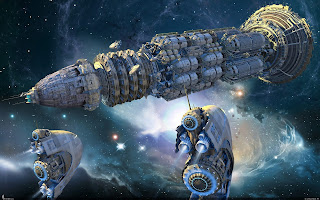 Decisions regarding spacecraft and starflight in my Hard Space setting for Classic Traveller:

1) In this setting, there are no empty-hex jumps. You need a gravity well to jump from or jump to, though being too deep in a gravity well is risky as usual. This gives space a "topography".

2) M-Drives are not reactionless Magneto-Gravitic drives but fusion engines. The "power plant fuel" is actually M-Drive fuel/propellant. The power plant actually has a reserve of hydrogen (or even He3) enough for decades. What you need LHyd for is the M-Drive. This produces constant thrust, giving the ship constant gravity - it is built as a "tower" with the engines on its "bottom" - though without inertial damping this means that you usually don't go over 1G unless in emergencies and combat, and then you need to be strapped into an acceleration couch. I know very well that the fuel consumption and thrust here are a handwave - in reality you will need MUCH more propellant and you'd usually avoid constant acceleration due to limited propellant - but its still a much smaller handwave than that required for gravitics...

3) As a result of the lack of gravitic technology, most starships don't land on planets. Instead, they use interface craft. Most ships thus carry small craft for landing purposes. Heavy freighters usually travel from high port to high port - as loading an unloading with shuttles could be unwieldy - and thus rarely appear on the frontier. The exceptions are Scout/Couriers and Free/Far Traders, which are "flying saucers" with their engines on their "bottom". When they enter an atmosphere and gravity well, they turn off their fusion drive and use interface drives to fly like aircraft, but the floor remains in the same direction, only now using local gravity instead of acceleration-based "gravity".

4) I am using Book 2/Book 3 drives and drive TLs: heavier ships are slower and ships are usually small.

5) As interface craft would now take some serious tonnage on most starships, I am increasing the TL from TL10 to TL11 in order to accommodate larger ships - up to 2,000 tons on a Solar Main only ship.
Posted by Omer Golan-Joel at 5:32 AM