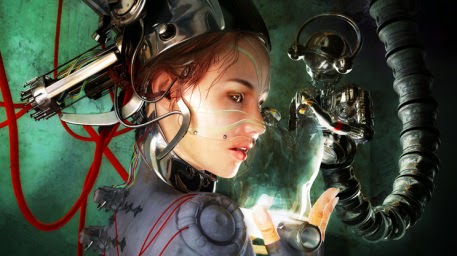 The Matriarchate - from my Ashes of Empire mileiu - are (formerly) Human belters who have embraced post-planetary life and post-humanism to the hilt. All are heavily enhanced by cybernetics and fully adapted to zero-G life, and all are linked to the collective data-net of their Mothership. This collective consciousness of each Matriarchate Collective did not completely destroy the individual, but rather diffused it quite a bit; imagine people who are subconsciously and instinctively connected to Facebook-Twitter-Whatsapp and automatically share most of their thoughts with the rest of the collective.

Each Mothership has a digital Mother Computer which sums up this constantly-changing consciousness, wired to a living Matriach - who adds her human spirit to the Mother Computer's mechanical calculations. The Matriarch, contrary to popular Baseline (i.e. ordinary Human) belief, is not a ruler, but rather a component in the collective-consciousness network; the decisions made are by the collective networking of the entire Collective, not by her. The end result is an absolute direct democracy - all major decisions count literally every member's opinions, and the system always knows exactly what to produce with neither a market nor a central planner because everybody's material wants are networked (and tallied by the Mother Computer to generate work allocation for the manufacturies and hydroponic farms).

Contrary to popular belief, the Matriarchate lacks a centralized leadership (each Collective is independent), and is also not interested at all in adding anyone else to their networks or conquering anybody. HOWEVER, the Matriarchate Collectives show utter disregard for Baseline property rights and have an annoying tendency to simply emerge from Jumpspace in the middle of a rich asteroid field and mine it for raw materials despite the fact that whatever corporation owns it under Imperial law. Each Matriarchate member rarely strays far (over a few light-seconds) from her (or his or its) Collective or at least a sub-collective (centered on a smaller ship), as the disconnection from the network would be crippling. Only those with special training to serve as Emissaries can function individually away from the mother-network.

Many human concepts, from privacy to any kind of government to lying, would be meaningless in the Matriarchate. Not because they are repressed, but because there are obsolete and pointless in such a society. There is some semblance of individual, but it is very diffused; it's hard to tell when one Matriarchate member ends, and the other begins. Talk to one, and the rest of the collective participates in the discussion through his or her neural link.

Unlike the Borg of Star Trek fame, the Matriarchate has zero interest in "assimilating" Baseline humans. They care little for what they perceive as utterly primitive, animal-like Baselines with their atomized society, like of planetside life, disconnected minds and complete ignorance of each other. Baselines may be a nuisance, or a threat, but not a resource.

The only resources a Collective needs come from asteroids and comets. And if one Baseline or the other contests these, well, it's time to hack their ships, and if that fails, use mining lasers and plasma torches on them. Now that the Empire has collapsed, a few Collectives do enter former Imperial space, not only to harvest asteroid belts, but to trade high-end electronics for various organics and rare earths that are uncommon in asteroid fields.
Posted by Omer Golan-Joel at 11:50 PM